The USN Thresher AKA Between the Sword and the Flame

In my last post, Duke Springer and the crew of the Antelope battled a Talitarian scout ship. Quite possibly, this ship is my favorite ship ever.

Rather than doing a mod of it, I have redesigned the ship from the ground up and designed a deckplan and backstory for this version. 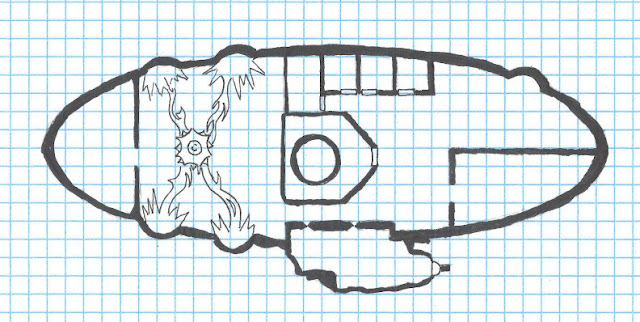 The United Space Navy's Thresher Scoutship utilizes bleeding edge technology which is not available except for a few prototype ships. The ship is tiny. After the size, the next notable feature is it's engines.

The engines have four nodes which manipulate space-time in some rather horrifying ways. The engine requires that the ship be sealed from the outside while the interior can have NO closed spaces. To meet this requirement, the hull was grown from a single seed of metal. The walls look organic and flowing. The engine is called "the Flame" by the crew as it throws off a flickering light throughout the interior of the ship. Anecdotally, it is reported that any one who enters the engine area while the ship is in motion is erased from the entire space-time continuum as if they never existed.

In the center of the ship is a single turret and four staterooms. While these spaces have doors, they are not sealed to be airtight. The "turret" is a standard crewspace for the gunner which can move like a regular ball turret, but the gun mount on the exterior of the ship is actually a tiny remote piloted vehicle which flies in formation with the ship at all times, as if it was attached to the vessel.

On the starboard side of the ship is a second weapon, called "the Sword". It is a gravometric weapon which will kill any humans in the target area. It can strike inside an enemy ship without passing through the intervening space or shields and armor. "The Sword" theoretically has unlimited range, but the crew must have details of the target point, which means it is limited to sensor range.

It's a surgical weapon, but is subject to considerable quantum uncertainty when fired. It often fires with no measurable results. "The Sword" has one other side effect. It will kill any crew inside the Thresher in front of the barrel. For this reason it is fired with a delayed trigger so the crew can take refuge in the turret area or staterooms.

A final quirk to this weapon is it will not operate unless it is mostly sealed away from the rest of the ship. It does have a connection to the engines. The area which looks like a hatch is welded closed before take off and cannot be serviced in flight.

The engines also have a similar disconcerting quirk. They must be operated from behind. A crew of three engineers are stationed in the back compartment and cannot leave this area while the ship is in operation. The engines require exactly 688.5 kg of mass to be located in this space and three living people. No one knows why.

This is just enough room for food, water and air for three days, plus 3 people and 3 space suits. Typically these crewmen stay suited for the duration of the flight as it makes weigh distribution static.