Where do I go from here? I have technically won the game as I no longer owe on my ship. If Duke is supposed to break the law, perhaps I could bend the rules for fun. 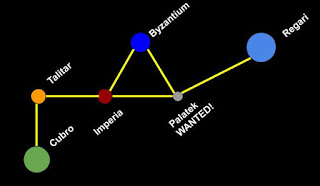 Sounds like a plan. Let’s break some of the solo rules for Star Smuggler. I’d like a bigger ship, but let’s not go that far. We could do some other things and check for consequences as we go.

Let’s start with where I am. I’m on Imperia, at the spaceport. I didn’t mention this move yesterday, but that is what I had to do to sell the boat guns. It takes 3 rolls to purchase hypercharges. I top up and keep rolling. I have hired a second engineer and another starship gunner. I’ll call them Lucy and David.

That took seven rolls, so I have three hours of daylight. We make for orbit and get three units out.