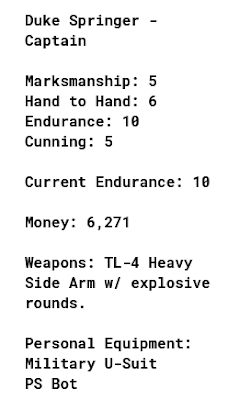 The other day, I posted my character sheets in preparation for this post. The ship is attacked by pirates who are pouring into the ship via the airlock and cargo hold. Three can enter the cargo hold per turn and just one enters the main airlock per turn. They have side arms, a problem producing axe and u-suits.

Each pirate has the following stats: Endurance 8, Marksmanship 4 and Hand-to-Hand 6.

To the pirates advantage, each carries an axe which can easily cut through walls and will automatically breach a suit, disabling the character inside it.

My advantage is, my character’s have military u-suits which take two hits to breach, 5 are carrying heavy side arms with explosive rounds and high tech level and two characters have good side arms, which are TL-3 and TL-4 respectively. Also, I roll for the pirate’s equipment and it is TL-1, while my lowest tech level is TL-3 and the rest are TL-4.

This game has no initiative and rarely a surprise round. The person with the highest tech level weapons goes first. In this case, it will always be my crew. Surprise is defined on a case by case basis by the event listing, which didn’t happen this time.

The game is not really specific about distances. There is melee and ranged. You can shoot or you can move into melee range and attack. You get one attack per round, either ranged or melee, but not both. Ranged attacks are resolved first then melee. A person can forgo a ranged attack to avoid getting into melee range. Duke has a noticeable bonus in hand to hand attacks, he can use his cunning to add one die to the attack roll.

To resolve ranged weapons, add the character’s marksmanship score to the weapon’s tech level. Roll under this value with a  2d6. Success is a hit. The same goes for Hand-to-Hand, but generally this is punching which is very low damage. There are not many hand weapons available in the game.

Mechanically, this scenario is unwinnable by a crew of less than four, because they must disable 4 targets in one round. Even with a party of 9, it took me 5 turns to do so.

For ranged attacks, the pirates had a ranged target number of 4+1 or 5, while my worst character had a target of 6. Two of my characters had a target of 6+4 or 10. Each hit does a critical or one point of damage.

Now, critical hits also play into this as do special effects. When rolling to attack, a critical occurs on a die roll of six. To resolve this, a special die is thrown. On a roll of 1 or 6, the target takes no damage but is disabled by concussion. If a 2, 3, 4, or 5 is rolled, that is number of hits the target receives. So a regular side arm can put someone down in a single hit on a good roll.

Heavy side arms are different for damage. They roll 2d6 for damage. On a 2-7, that is the number of hits done. On a 8-12, the target is down due to concussion. My heavy side arms have explosive rounds, which shreds u-suits. In a vacuum, this is lethal. It seems like the author intended to have heavy hand weapons and explosive effects as two different things, but it was left out for some reason. It does briefly come into play in specific events with unique equipment. In some cases, a heavy side arm is not able to damage a thing unless it has the property of explosive rounds. The primary example of this is Utility suits. To automatically rupture them requires explosive rounds or multiple hits in one turn.

When playing out this scenario, the Pirates have an Endurance of 8. This means a single, non-critical hit will not knock them out of the fight. You must either get a critical or depressurize the ship. It wasn’t until the 3 round that I noticed this was possible. I was taking down 3 of 4 guys by piling on wound points, but there was always a pirate that survived. Once I depressurized the ship, every hit with a heavy weapon downed a pirate. Since I had 7 shooters and 5 with heavy weapons, it was a piece of cake.

Since I am thinking of using these rules as an actual RPG, let’s look at some assumptions that I made. First is movement. I assumed that a person could only move from one area to the next in a round and moving away from an attacker was avoiding contact. Duke did this when he ran to Pilotage and back as did Emily when she went to the cargo hold. Running into an attacker would allow for contact and melee, but only if the stationary person wanted it. The pirate did not, so it didn’t happen.

Those axes are problematically for the player’s crew. They can down someone in a single hit, suit or not. I didn’t add them to the Antelope inventory because they nearly create an automatic win condition for the crew. Some crew can do Hand-to-hand in self defense, therefore the axe allows them to down opponents in cases where the rules seemed to indicate only a minor defensive ability. That ain’t minor.

I wasn’t in much danger from this attack. Remember, I placed Bones and Doc in Pilotage, which has a functional Stasis Unit. If they had gotten in to trouble, they would have activated it. The Stasis Unit removes the possibility of using the ship until removed by an engineer. If Duke was the only one on board, then I would assume turning on the Stasis Unit is an automatic loss.

The danger in this scenario is the number of crew vs. the number of pirates. If a pirate gets to the controls, it’s all over. The player merely has to stop the guy coming in the airlock, not the distraction in the cargo hold. However, the distraction allows the pirates to flood the ship if the player doesn’t acknowledge that they need to defend Pilotage. By simply waiting in Pilotage, the pirates will cut a path from the hold to the cockpit, which allows a group of characters assembled in that area a clear shot at everyone. This should eventually work to the player’s advantage.
Posted by Phil Viverito at 2/29/2020 03:06:00 PM