Several postings I read today hit me like a blast from the past. I used to write more often and post stories to my blog. Before that, way back in 2010, I launched my blog about a game called Myst. Oh, so long ago.

Larry Hamilton's post about a short story, named "Call to March", and Reverend Fox shared a link about Myst. Clicking those links will get you MeWe, Larry's Blog, and Youtube.
Tonight, I realized that all of my stories fell off the blog and are hanging around in draft mode. I figured I'd bring one back. This one doesn't have a title. It's a little Advanced Dungeons and Dragons with a smidgen of horror. I suppose I should do more, but I am short on time. I could spend somewhat little time I have restricting these old posts and stories.
Even if you don't like the story, I hope you enjoy the embedded document from Google Drive. It was a fancy trick I accidentally learned from Mike and Shell "Presto" from their superhero website.

Hop, Skip and Jump Over the Shelf

Time isn't just flying, it's hopping, skipping, and jumping. If you look at the time to the right, three days came off this morning as our scheduled move-in date changed for the better.

This morning, I began prepping some of my games for transport. But before I did that, I took a shelfie to share: 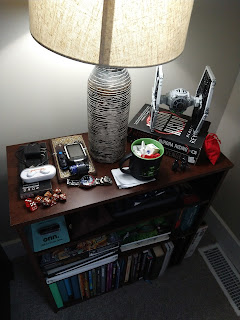 You can't really see what's there, so I will describe some of it. On the front, left edge of the shelf are my lucky orange dice plus my Dollar Store dice.  Next to that are three more important things, my watch, my glucometer, and a copy of The Prophet by Kahlil Gibran. The Prophet is the first book I bought for my wife on our first date. It was the first book I ever read aloud to her and the first book she purchased for me after the fire. 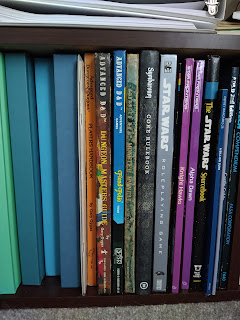 On the next shelf are tools: flash drives, a Chromebook and bookmarks. I'll skip the third shelf for now and move to the fourth, pictured to the left.

These are some classic books that I am sure everyone will recognize. Clearly, I love old-school AD&D, Star Frontiers, Battletech, and Star Wars. I have a few other interesting books there, too.
On the far left are my sketchbooks, I typically burn through one every 3-4 months, so this meager stack is more than a year's worth. 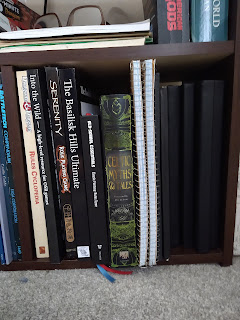 On the right side of the shelf are more books. These are relatively new to my collection and the ones I have been looking at recently.
The far right-hand side of the shelf holds my notebooks and journals. They are all grid paper. I burn through the spiral and perfect bound books about once a month.
I am much more careful and conservative with the black faux leather-bound books. I use one of those every 2-3 years, so I have a decade or more of writing material in them. They go everywhere with me, like the lucky orange dice, which I guess makes them lucky, too.
The first leather-bound book contains a handwritten copy of all six books I have written and offered on DriveThruRPG, plus notes for the next six.
I only write important things in these faux-leather books. On March 6th, I wrote down some interesting notes while at work. We (the teaching staff) received word that there would be some sort of State of Emergency in the next few hours or days. I wrote it down as if I would forget.

Like anyone would forget... Nothing was written again until March 20th, when I labeled the section "Pandemic Friday" and noted the stay-at-home order. COVID is the reason I write so sparingly in these books and keep a large supply of sketchbooks on hand. I ran out of supplies during the pandemic.
Let's circle back to the third and most important shelf. 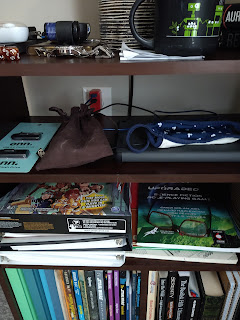 On this shelf are some really great items, aside from my all-important reading glasses. The top box is "5 Minute Dungeon". Underneath that are print-at-home books, presumably from DriveThruRPG: Master of the Rogue Spire Volume 1 and Volume 2, a copy of both the 1981 basic and expert D&D rules, and the notes I took in my last B2 Campaign before all of this mess.
What makes all of these so great is someone I'll call "Blackrazor" read about the problems we were having and gifted me these books, plus dozens of more. I have yet to say, "thank you" enough. These items were well-loved, providing many hours of entertainment and distraction for me and my family.
As time permits, I will probably comment more on these items. But in the meantime, the gaming stuff goes into boxes until the move is complete.
Again, thank you all. For everything you have done and will do.
Posted by Phil Viverito at 4/10/2022 12:49:00 PM No comments:

Email ThisBlogThis!Share to TwitterShare to FacebookShare to Pinterest
Labels: Games, IRL, Thank you

How Ability Rolls Came to My Table

It's been a bit since I posted, so let's have an update. The counter to the right displays 25 days or 209 if you jumped into Old School Essentials' Kickstarter. I find myself putting stuff away lately rather than reading or gaming, which obviously decreases my post count.

In my last post, I talked about table trouble. This one could have been called "Theif Envy", but the concepts are one and the same and tie back to OSE.

I used to alternate between D&D and Star Frontiers campaigns (links go to DriveThruRPG). The idea of rolling against a skill is baked into Star Frontiers but is an add-on to D&D. Thieves have an array of skills that no one else has. Sure races have percentage skills for detecting doors and sloped passages, but a dwarven Thief character is like no other.

It makes other class players envy those skills.

Now I actually remember when the idea of rolling for certain actions came to my table. The party was at the last door in the dungeon and had plenty of warnings that the exit door would be trapped. The Thief took the lead and easily detected the dart trap in the oversized, dragon-shaped door handle. Then THE PLAYER got cocky.

"I'll detect for poison!" he shouted.

"You found some!" I shouted back.

It was too good to pass up. I made him roll against his constitution score. He failed and was paralyzed. The party escaped, dragging the butt hurt Thief behind them, but as they closed the door on the dungeon, I could not close the door on "ability rolls".

The one thing that could have stopped this from happening was a simple and clear acknowledgment of the player's humor vs. the character's intent. There was no way that character was that stupid. Or funny for that matter. Every other social encounter this character and player had was decidedly taciturn or even sour.

I shouldn't have let it happen, but I happen to like this style of play... To a degree.

If a character needs to do something that can be described easily and doesn't invoke any sort of fantastic ability, the die roll itself is suspect. As much as some people can be funny like the aforementioned thief, some people's reactions to situations can be just as good.

When the player of the Fighter hears a threat from an opponent and puts on their game face, the perfect, bone-crushing game face, he or she shouldn't roll for anything. They are not intimidated and perhaps turnabout happens where the mouthy NPC has all of his buddies fail a morale check right from the start, leaving the Fighter and the Mouth to work it out.

You see how that's different, right? A morale check is hardcoded into the rules. But an ability check isn't. What would I have a Fighter roll against for bone-crushing aggressiveness? 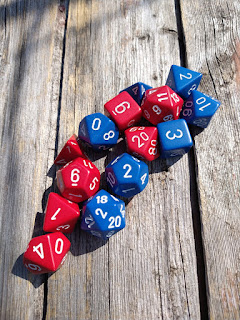 In all cases, I believe the characters should be able to do whatever they want when they want. It might not work out, but you know, I let them try. Unless someone proposes a task that maps directly to an ability score, I don't want the roll.

A trivial example is leaping on or off horses. I'm not rolling for that because 99.99999% of the time, the action is merely flashy and not necessary. The times when it's necessary, eating a face full of dirt is better than what would happen.

A not-so-trivial example is when the party or player comes up with the perfect plan, one that seems to have no flaws or problems and is delivered with confidence and flair? So long as all of their assumptions are correct, what is a roll going to do to improve the situation?

I can give a hysterical example of not rolling. I had a Magic User with a fly spell that he used all of the time. He got his hands on a ring of delusion, which he believed was a ring of flying.

"Oh, shit," muttered the rest of the party.

In talking this out with the DM, we decided that it was really a ring of double delusion. Not only did my character believe it was a ring of flying he would also be deluded into forgetting that he cast a fly spell to make it work. So the ring appeared to be a ring of inconsistent flying.

This was preferable to making a saving throw against the ring's influence. We kept track with a token, when I cast my one and only fly spell or invoked the ring's power, I handed over the token to the DM. Without the token, any attempt to fly would fail, usually with disastrous results.

My character would suggest ariel solutions to every problem even if it wasn't reasonable to fly at all. Again, this is a ring of delusion after all.

In Old School Essentials, you generally have a 1 or 2 in 6 chance of pulling some random activity for a skill that isn't quantified. That's a great compromise because usually, these events don't map at all to a skill.