The One About Star Smuggler Characters

Alright. Tomorrow I want to look at the combat that I just went through. In order to do that, we need to look at a character sheets. And because I am doing that, I need to reintroduce an old cheat that I implemented on day one, and a new one that I will implement tomorrow. 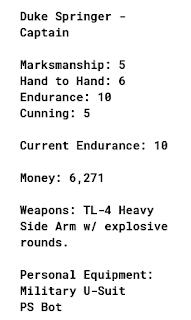 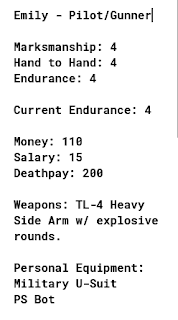 First, let's look at Duke and Emily. Duke is the player's avatar and has some extra abilities no other character has, such as a last name.

Duke has the ability to fly the ship or fire the guns. No other character should be able to do that. He can also use heavy and standard side arms, which is not typical for a pilot. He can also trick people with his cunning skill.

On day one, I wasn't sure how long this game would last, so I declared that Emily would have all of Duke's abilities except cunning. If she had taken over for Duke due to death, she would have been given an Cunning of 4. 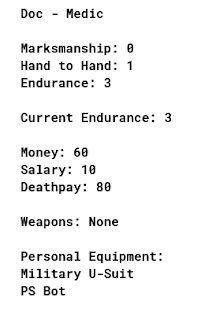 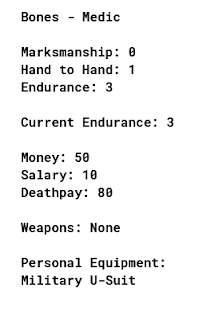 Next, I want to talk about the medics. They can keep a character at zero hit points alive until rescue. They will attempt to avoid hand to hand combat, but do have a score.

Medics can assist Duke in certain events in the book, which is hinted at in their introduction, so they are good to have around.

Additionally, they can stop a bullet or tie up a person in melee. It's a bad idea, but they can.

As another limitation, they cannot use the ship's radio. 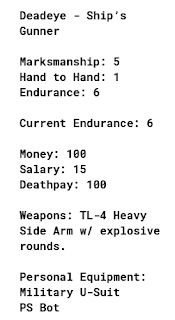 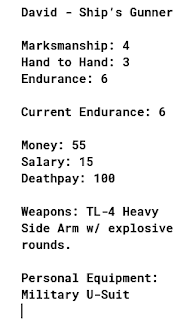 What is interesting about this type of character is, they are better than bodyguards. Bodyguards do have skill to interpose themselves between Duke and a shot, but can't operate the ship's equipment like the gunners can. 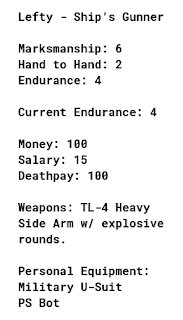 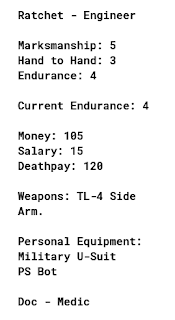 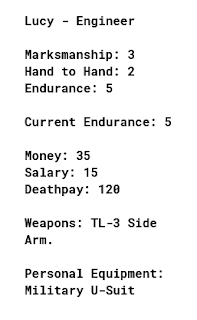 Next in the crew are the Engineers. They fix and maintain things. They can use a side arm in self-defense. Oddly, they are one of the few characters that can drive a skimmer. I am not sure why this is.

Engineers can repair the ship, the hopper, robots and other vehicles at a rate of one hit per day in RRR.

One thing that I did over the course of this series was limit the Engineers ability to repair. Technically, you can take a crewman out of service so they can perform RRR while the ship is in motion or while other crewmen do something else. I didn't allow this for clarity.

As you can see, I have been keeping a running tab on how much money each character has. What you are not seeing is an accurate count of hits. Hits reduce endurance and I have been using pen and paper for that. Lucy has a hit of damage, Duke has two and Emily has one.

From this point on, I will be doing a second cheat in regards to crew equipment. If it is on the character sheet, it doesn't count against my CU space on the ship. This is a slight bending of the rules, as a character can wear a suit, carry a heavy side arm and be attended to by a PS bot but that takes up 4 CU's of space. I am ignoring that for simplicity's sake. Someone may have to strip off a suit and drop their weapons to get into a 1 CU space, like a Status unit but other than that, I am no longer counting carried personal equipment as taking up cargo space.

Tomorrow, the adventure will continue and I will do a breakdown of the combat from today.