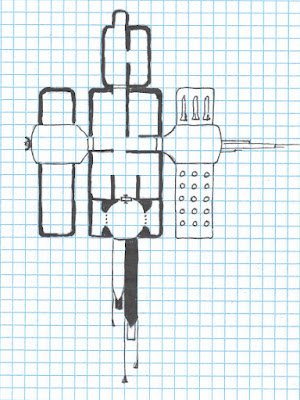 The Centaur Transport is a very successful design, for a warship. It is a mediocre transport. The central hull of the ship is of fixed design with 2 mass drivers as propellant. The wing pods are interchangeable cargo spaces. In this image, the right is plumbed for liquids while the right carries 20 missiles in VLS tubes and 12 nose mounted drones.

The ship is a tumbling pigeon design, meaning gravity is generated by having the ship flip end over end along it's flight path. All work is done in the back end of the ship, in front of the spherical weapons room. Typically, the crew only spins up the ship when they are coasting for long periods of time.

While this depiction shows missiles and drones, this is actually the least commonly used loaded out. The ship's mass drivers make a very effective weapon.

When used as a transport instead of a gunship, it uses aerobraking to slow down to orbital speeds before using small thrusters to match orbits. It is a very ungainly design for a transport.

As a gunship it simple barrels in on it's target, VIFFing (Vectoring in Forward Flight) to dodge fire while using the mass drivers to bombard the enemy as it slows down.
Posted by Phil Viverito at 2/15/2020 10:35:00 PM