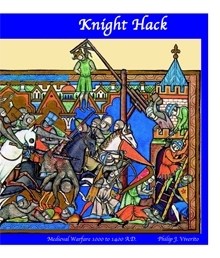 The original Hack series was born in 1991 and it was a reflection of the times. Knight Hack, Third Edition was born in the 21st century and is also a reflection of now. The game has a evolved so much, it is hard to see how 1st edition relates to third, except on first principles. This is a game for gamers, written and tested by gamers.

As the person responsible for supplying the art for original book, I have to say third edition is by far superior. Most of the clipart is gone, replaced by full color images of the game in actual play. The rules have been simplified with a new D-10 system, which reduces the rule length from 52 to just 19. This is accomplished by the removal of the concept of troop type and the premade Q.R.S. or Quck Reference Sheets for each era and type of army. The rules now have a proper table of contents and an index in addition to the required charts and 38 pages for the Q.R.S.

I hate to say it, but everything I knew about and all that I did for the first edition is gone. And the rules are better for it.

I've posted about my first Con in 1977. I still have the brochure. It was a formative time for me. I would have been all of 5 years old, and there I was watching WRG, Tractics and most importantly to me, D&D being played for the first time.  It left quiet the impression.

Fast forward a few years and I was in to all of these Games Designer's Workshop and Task Force products. I had Robots, Striker, Traveler and Federation Space. I still have them.

At the end of the day, knew that something like Knight Hack would be made. My parents made sure that I knew enough about games, the importance of play and of inspiration to know that things change and usually for the better.

Tonight, I stumbled across one of my first coloring books: Camelot. 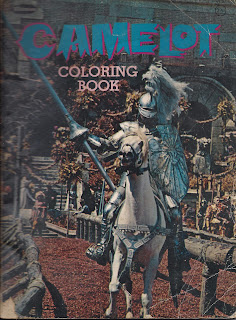 The copyright is 1967, by the Whitman Publishing Company. You know, parents who make something like this one of the first coloring books is instilling a love a play, games and history.