Time to go. We boost to orbit and make for Palatek. 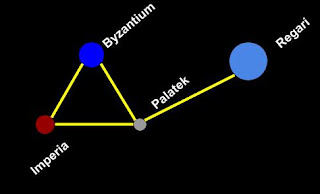 We get a better response in the Imperia system. After a brief radio message, we are permitted to land. We head for the Slums to sell of these side arms.

We make a system contact in the Slums. We spot a rich man guarded by 9 body guards, he is carrying 5,000 secs. If we attack him, we become wanted in this system. If we kill them all in 5 rounds or less, we can take his money and equipment.

Side arms do no damage against Starships or Hoppers. Starship guns to 10 points of damage per person hit. Ship and Hopper guns will hit a person on a roll of 11 or less on a 2d6. There are 10 targets, so I would need to hit with both guns every round.

IF I missed in the first couple of rounds, I could increase my chances of victory by landing the ship and sending several characters out with heavy hand weapons, while still blasting away with the ship and hopper guns. I played out this combat 12 times and found that I kill everyone with just the Ship and Hopper guns 9 out of 12 times. By landing the troops, I win 11 of 12 times but have 1 or 2 characters injured, one of which is always Duke. I am virtually assure of victory.

I don’t do this, because I can’t stand to be wanted in two different systems. The day is over.