The USN Chesterton, Growler and Variants

I'm not feeling so hot tonight. I have a cough and cold, so I can't do detail work. I figured I will just do the write up on this ship. This is middle and largest deck of 5 levels.

The USN Chesterton was peace-time design for a frigate. The ship featured a large central engineering bay with the bridge just fore of it. Along the front rim of the disc, a variety of weapons were mounted. In the aft area were the crew quarters along with the main elevators. The engines were mounted at an angle, which gave the ship incredible maneuverability at the cost of top speed.

Since this was a peace-time design, the frigate never made it off the drawing board. Instead, it was re-purposed into heavy tug and transport vessel. 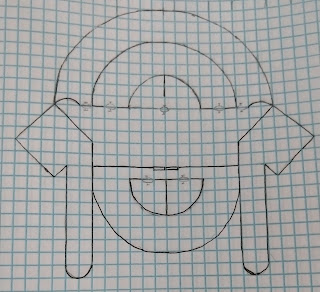 This configuration necessitated switching the crew quarters away from between the engines to the forward section of the ship where the weapons would have been in the name of safety. It was felt that damage to the engines could too easily breach the hull and kill the crew. USN crews fight suited, so this was not a concern for a frigate.

When the war started, the Chesterton dry dock facility was already tooled up for transport production and switching to frigate production was easy. Since there were a great many Chesterton tugs and transports already plying the spaceways, this variant was given the name of "Growler" to set it apart. Before the first ship was released from the dock, the class name was changed again to "Cestus".

Because the Chesterton was a proven design, the Cestus/Growler configuration was only minimally tested. The placement of the tightly packed crew quarters in the rear of the ship was never studied. The crews soon found that the engines caused vibrations in the crew spaces. Unofficially, the crews reverted to the "Growler" designation as commentary on the ship's qualities. While not a fatal flaw, the ship was strongly disliked by their crews.

The first and last ship of the Cestus class do not have these problems as they were built to the specifications of the Chesterton for special missions such as mine warfare and electronic intelligence collection.
Posted by Phil Viverito at 2/18/2020 08:33:00 PM