In the last Wizardry post, I said:
“Wizards, lords and samurai gain spells a lot slower than the pure clerics and mages. Wizards gain spells at the same rate as mages and clerics, but the spell levels are divided between the two types making them weaker but more diverse casters. Lords and samurai gain about half the spells of the two pure casters.”
Now that I have played for a bit more, I noticed the actual rate of spell learning.
Mages and Clerics earn one spell at first level and then gain an additional spell every two levels. The progression is 1st, 3rd, 5th, 7th, etc. Roughly, your mage and clerics will have spell levels equal to their level minus one, divided by two. There is a limit of 9 spells available per level.
Wizards gain spells much slower. They gain 1 mage spell at first level and the next spell four levels later. Fun. Cleric spells start at level four and progress at every four levels. This causes you to alternate between mage and clerical spells.
Samurai and Lords gain spells at fourth level, then receive an additional spell every three levels. Lords gain clerical spells while Samurai use mage spells.
Posted by Phil Viverito at 2/27/2013 01:23:00 PM No comments:

I dug out my copy of Wizardry – Proving Ground of the Mad Overlord and started reliving the magic. 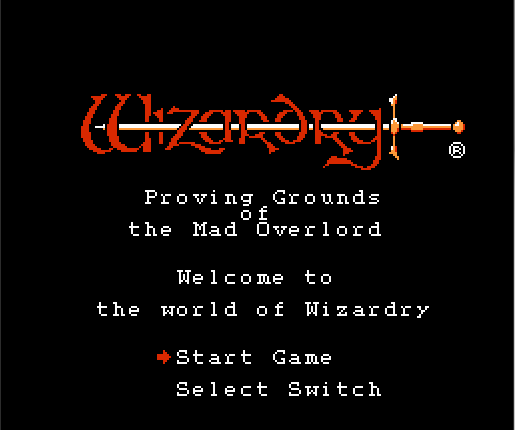 Years ago, I purchased some of my favorite modules in pdf format from DrivethruRPG. Once again, I could relive The Ghost Tower of Inverness, In Search of the Unknown, and Ghost of Lion Castle.
The pdf’s were wonderful. But starting about two weeks ago, I received an email advising me that new editions were available. What could have changed in just a few years on modules written decades ago? One quick download was very informative. Scanners have changed. File compression has changed. The first generation documents are washed out, blurry and big by comparison.
I know I raved to my friend about how great the modules were the first time I downloaded them, this time I am going rave about Wizards of the Coast and DrivethruRPG. After years, they remember me and asked me to redownload improved documents for free.
The improvements are incredible and I’m very happy with my purchases. If you have download from DrivethruRPG, check your email or account to see if any of your past purchases items have been updated.
Posted by Phil Viverito at 2/22/2013 01:26:00 PM No comments:

Yesterday, I covered creating a USB boot drive for CentOS. Today I will walk through making an .iso disc for CentOS using ISO Recorder.
Working with .iso is both easy and frustrating on Windows. Very often the software that comes with the computer is not up to the task. To solve this basic problem I suggest ISO Recorder. This software does not create a desktop icon or a selectable program in the Start/Windows menu; instead it adds options to the menu.
Time to get started. Download your .iso image and place all files in an easy to find directory. I am using CentOS which requires two DVDs. Insert a blank DVD and cancel out of any pop up box Windows 7 displays. Right click the desired .iso file. Select "Copy image to CD/DVD".
The burning software will open and display ISO Recorder on the left hand side of the screen. The Source should default to "Image File".
Click next.
Wait for the burn...
No seriously, wait and wait and wait. The status bar may hang out on 100% for a very long time. This is proportional to the amount of data on the disc. My first CentOS disc uses the whole DVD and took several minutes to complete. The second disc is relatively tiny and took only a moment.
Don't forget to label the discs. CentOS has a built in disc check in the install process, I would suggest using it on BOTH discs to avoid headaches.
**This post was moved from Pretendertothepower.com to Unpwnd.com.
Posted by Phil Viverito at 2/17/2013 10:56:00 PM No comments:

Mint 11 lxde is old, but I like it for my Asus EEE PC. It does have one annoying glitch. If you attempt to remove software such as gnumeric, the uninstall process leaves the program's icon in the menu. Annoying but not exactly critical.
There is an easy work around. Go to a convenient location and create a new folder called "deleted icons". Next open the /usr/share/applications folder. Go to tools and select "Open current folder as Root". This displays a new window. Find the offending software and select cut. Go to the deleted icons folder and again, select tools and open as "Open current folder as Root". Paste in the offending program and close all windows.
By shifting the icon via cut-paste, you retain the option of reinstalling the program.
Posted by Phil Viverito at 2/02/2013 10:56:00 PM No comments:

This post originally appeared on Pretender to the Power on June 5, 2012.
Unetbootin is a wonderful piece of software. It will create a bootable USB drive of your favorite Linux flavor.
Well, most of the time.
CentOS is a special case. The files needed for CentOS* reside on mirrors and not the support website. So, Unetbootin cannot reach them. Obviously there are ways around this. The most obvious is to download the files from the mirror, but let us forget about planning and forethought, shall we?
Step one, download Unetbootin.
Step two, open it.
Select the desired flavor of Linux. Note: If you do not choose CentOS this is the wrong guide for you. Be 100% sure about your drive letter. This step can cause all sorts of file deletion and badness.
Now wait for the OS to download. There are no files on the CentOS website, so this will not take long.
The last step is to reboot. I would recommend against using your one and only computer for this. Take the USB drive to a different computer and boot that one.
The installer is very user friendly, so I will skip everything up to the ftp address. The installer requires two pieces of information: the ftp site name and the Red Hat Directory. The example of this data is from the University of Chicago.**
FTP site name: bay.uchicago.edu/centos/
The Red Hat Directory: /5/os/i386/
Select ok and watch the magic happen!
* CentOS does have the option for a live disc, however I have not found a way to install using those files. To be honest, I didn't try very hard.
**The FTP site listed has CentOS 2-6. Choose wisely.
Posted by Phil Viverito at 2/02/2013 10:53:00 PM No comments: