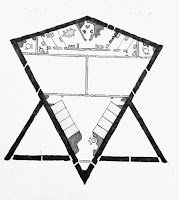 A few weeks ago, I brainstormed an Antelope-class starship alternate. I inked out a Buffalo-class starship. I really didn't like how it looked, but did like some of the ideas.

Last night, I busted out the Wacom Tablet and gave it another go. It turns out I am really not good with either Inkscape or a Wacom Tablet and had to resort to mouse and keyboard. However, the results were nice. I came up with one new design I call a Blockade Buster, which is designed to fight and fly. It is more than twice the size of an Antelope-class starship and has a couple of different options for cargo and ship's boats.

First, the ship. The Antelope-class has 126 CU of space. The Blockage Buster has 256 CU of carrying capacity, but some of it is limited. The Boat Bay, Cargo Bay 1 and turrets are identical to those of the the Antelope-class. 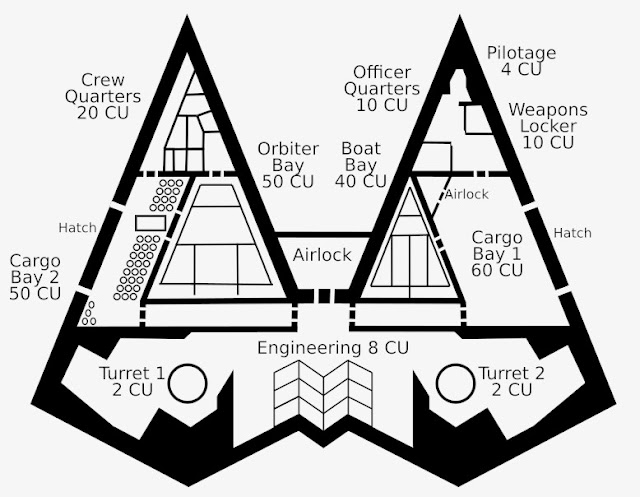 However, the Blockade Buster has two turrets. Engineering, and Pilotage is twice the size of the Antelope's. There is a Bay for an orbiter, which is a larger shuttle that can carry a skimmer. The Cargo Bay 2 is specifically designed for consumables. It can hold one skimmer and has 36 racks for any type of consumable unit, such as Life Support, Repair or Fuel. In the corner is space for 4 Utility Suits. There is a locker for weapons near the officer's quarters. On the opposite side of the ship is a large suite of rooms for crew quarters. The Blockade Runner holds 12 hypercharges.

Special Rules for this ship: There are no hidden storage places. Cargo Bay 2 cannot be reconfigured to hold other items, the racks are a part of the hull. The ship has no installed Stasis Units. This ship has 12 hits.

If you would like to incorporate this into Star Smuggler, I have pricing and other information here to mix into e001 and e036.

Next post, we'll look at the Alternate Hopper Class Boats. I will also post some generic deck plans for any game system.
Posted by Phil Viverito at 2/02/2020 12:15:00 PM