Obviously, I am trying to do something in particular. So we make 10 more rolls at the spaceport. 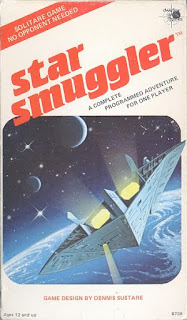 Well, here comes the major rule breakage. I buy the ship for Emily as she is a pilot and heir to Duke's Smuggler Empire. Not much an Empire, but hey. This gives me a fleet of two ships. I suspect the rules weren’t designed for this but there is nothing saying I can’t do it. There are two rules, r220b and r220c which covers abandon crew and isolated crew. Neither really fits because I plan on having the two ships stick together. This would be no different than having Duke flitting around in the Hopper while the Antelope follows along.

We are going to sit tight at the spaceport and do some RRR tomorrow.