I've been rocking out so much work, my hands hurt. Better than being bored. I've been drawing a lot of inspiration from my wife, Kitty and my daughter, Cat.

The first image I did over the weekend was actually sparked by a class I'm taking, Children's Lit. It's Prince Philip and Aurora under a tree. After I got my groove on, I started taking requests. That lead to Alice then Ariel. I've been working entirely in ink up to this point. Well, not "entirely", I sketched out the designs in pencil first and then diligently erased the lines. 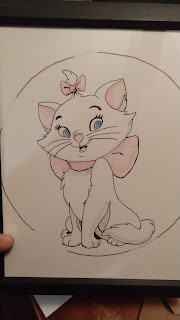 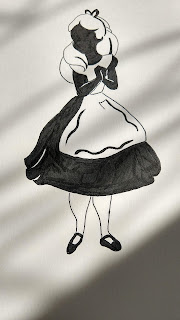 The final request was from Kitty and was really outside of my comfort zone. It was Marie from Aristocats. I love the artwork in this movie, it's classic 1970's stuff. In many parts of the film you can still see guide and the sketch lines under the colorful animation.

I don't remotely work in this style but decided to give it a shot. I worked with only two pens and 4 colored pencils. I can't say that I am entirely comfortable with the colored pencils, as I am more of a charcoal or ink sort of guy, but I really enjoyed the process.

I don't even own a set of colored pencils, I raided Cat's school supplies for them. I worked until about 2 am last night to get it done and framed.

I have to say, framing up 3 of four pieces of art in as many days feels good. But now I am Disney'ed out. I want to get back to my own favorite subjects.

A few weeks ago, I accidentally closed an open pen in my sketchbook, marring a favorite drawing of a character named Emily. I did have a photo of the sketch which I thought would help recreate it. I was going to throw it on my lightboard and go at it. But I was still feeling adventurous and decided not to redo something that I felt was done. Instead, I set out to create a new pose of Emily, in the classic Rosie the Riveter style. To enhance the retro feel, I replaced her 1980's styled space suit with one from the Mercury missions.


I had thought that this would be another ink job, but as I worked with my daughter's colored pencils in reach, I decided to give them a try. It's missing something, so I know I be reworking her again. But the process was very enjoyable. 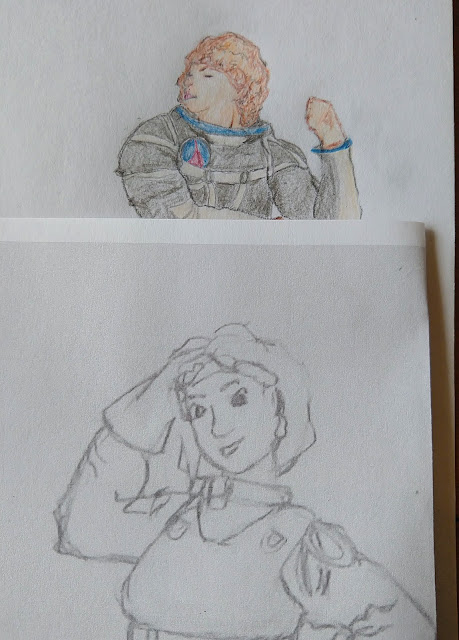 Email ThisBlogThis!Share to TwitterShare to FacebookShare to Pinterest
Labels: Artwork