We have some choices to make. New Karma is a double world system with a Tech Level of 1 and a Wealth of 70. I need higher tech items at cheaper price. The two systems with connections to New Karma are Uruskop and Mynkuria. Mynkuria has two planets and each are Wealth 30 and Tech Level 60. They are also at war with Nipna. Uruskop is a single isolationist planet with an asteroid belt at Wealth of 40 and a Tech of 40. Given my choices, we are off to Mynkuria for the tech code.

We don’t make any contacts on the way in and we land on the second planet, at the military base. This planet has no air and a gravity of 5. The gravity ain’t bad, but combat here will be deadly. 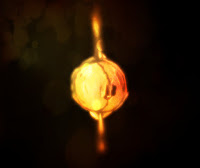 Our contact roll indicates we found a strange device of unknown purpose. You know what? This ship is new and I’m not touching anything.

With that done, we settle in for bed.