I need to change the dynamic of the game to make continuing a meaningful endeavor. Right now, I have 200,000+ secs. and no deadlines or meaningful limitations. I love NPC characters, as evidenced by D&D supplemental Zero to Hero, so having a veritable army of them also means I fewer challenges.  Heck, I increased their pay to 1% of all sales and still have hundreds of thousands secs.

I need to put the lock back in place. We are going to purchase a ship via my rewritten e036 rules. We will trade the Antelopes for a new ship. When I rewrote e036, I did not anticipate having multiple ships. I made that detail up on a whim. To even things out, Duke will trade his ship in for 60,000 credit on the principal and Emily will sell hers for half of that or 30,000. Used car dealers…

Here is a blank sheet which assumes that the player has two hoppers in the bay. 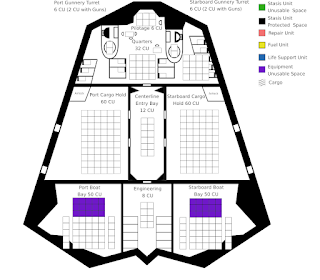 To soak up more cash, the used Buffalo Heavy Transport doesn’t come with boats, guns, boat guns and has a single hypercharge. We decide to purchase all of them at the dealership, which comes at a premium price. We pay 1,300 for each hopper, 900 for each starship guns, and 1,800 for boats guns (each) plus 3,500 for hypercharges. This planet is Tech Level 10, so all of our stuff is Tech Level 1.

That sets us back 11,500 which is subtracted from Emily’s trade in of 30,000. We made 18,500 today in the trade. Since this wasn’t a “sale” per se, the crew gets nothing off the deal except new digs. We spend the rest of the day transferring cargo from the old ships to the new. The new e036 rules specifically state that we cannot transfer hoppers, guns, or the stasis unit in pilotage. It's a shame, because those guns were sweet. We'll have to upgrade what we have later.

Here is our new "Buffalo as Character Sheet". I have moved all of the cargo to the ship except for the 4 vials of pheromones and crew equipment, which are on each individual's character sheet. 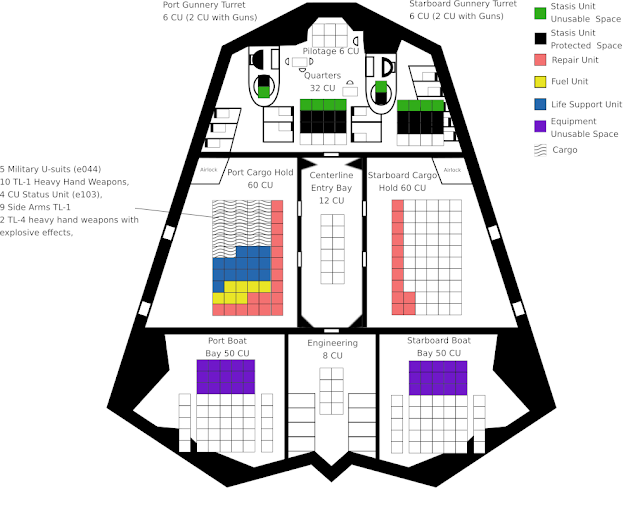