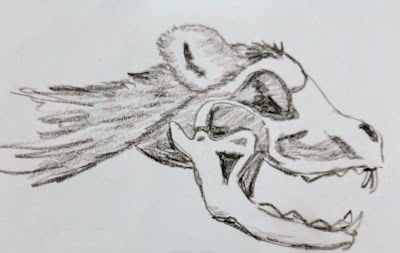 The Skin Golem or more commonly named, "The Skin Wolf" is a unique creation of the Coven of Ash.

The witches of the Coven of Ash wear these pelts as a stole or cape, which conveys the Skin Wolf's armor class to the wearer. The Coven of Ash tends to use the largest martens as Skin Wolves, which has 9 hit points. Wolves are not common in the area. Theoretically, any fur bearing mundane animal can be used to create a Skin Wolf, such as a weasel, a bear, dog or actual wolf. The witches of the Coven of Ash have tried to make gnoll, elf and human skin golems, but it doesn't work. It also does not work on giant variants of mundane animals like Worgs, Giant Weasels or Elk. The name "Skin Wolf" is colloquial, it isn't actually description of what they are made of. The humans of Empire are aware of these creatures and are terrified by them.

If a victim survives an attack by Skin Wolves, they will notice a particular smell about them which will alert them to future attacks and foils surprise one third of the time. Note: this also applies to the witches themselves if they are wearing one. The number of Skin Wolves appearing is always equal to the number of witches. These golems are only useful to the creator, they are powerless in other people's hands.

Skin Golems are relatively low level golems, which require a pelt and skull, special incense and the following spells: Friends, Clairaudience, Clairvoyance, and Fly. It requires a minimum of a 6th level caster and a piece of incense valued at ten times the number of hit points the golem will have. The pelt and skull must be pristine. It requires one day to create a skin golem with the materials on hand. Hit Points are determined by the size of the animal, but the living creature must have had at least one hit die.

The creation process requires gluing the pelt to the skull which looks far from natural. Sometimes the ears and eyes don't line up between the pelt and skull. Also, the witch may choose to dye the pelt to either be stylish or fearsome. The Coven of Ash has a tendency to consume the flesh of the animal, however this is an alarming life-style choice and is not a part of the ritual of creation.

The Skin Wolf is a weapon of terror. They fly up to 30 feet from the ground and sound like a bullroarer in motion. They can strike up to 3 different targets, once each along their 24" per round flight path. They target the people closest to the witch first and work outwards. They are very maneuverable, but cannot flip end for end and require momentum to do damage. Therefore they tend to strike 3 different targets in one round, not the same person over and over again. Since they are simply flying pelts, they cannot grab, bite or otherwise manipulate objects. They can knock things over which makes noise and a mess. On a natural 20, they hit so hard that they knock the victim down rather than doing double damage.

The witch can choose to directly order the skin wolf to attack a single target, however, this limits the Skin Wolf to one attack and only allows a strike on a target the witch can actually see. It also precludes the witch from casting spells or making their own attacks. If  a witch feels like they are in control of the combat, they will make gestures like they are direct control of the Skin Wolf to terrify victims. If a witch is invisible and wearing a Skin Wolf, issuing it commands counts as an attack and ends the invisibility for both. Skin Wolves cannot be silenced or turned invisible, it defeats their terrifying purpose.

If the Skin Wolf is not engaged in combat, the witch can see and hear (not smell) what the pelt can perceive. Usually, the witch will place the Skin Wolf someplace to watch an area not command it to fly around looking for targets, however that can be done, too.

They have a special defense, bolts and arrows do only 1 point of damage per hit. Also, grenade-like weapons have a -4 to hit and they can dodge splashes. This is not true of thrown daggers, darts and other hefty weapons. They do full damage.

Holy water does 1d3 points of damage. It is often more effective to pour the holy water on one's self than try to make a grenade like attack as this damages the Skin Wolf every time it successfully lands a hit.
Posted by Phil Viverito at 3/08/2020 12:50:00 AM