Session Update - Just Let It All Hang Out

After very nearly wiping out the party by accident and the players loving it, I decided to put the pedal to the metal and crank up the intensity. Many of the characters leveled up on the last adventure, so there was some give to the take. 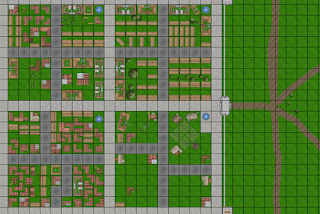 The characters broke into two groups, then four by necessity. The plan was to meet up at Five Tree Hill, just outside the city gates by lunch time, but it was lunchtime when the first group arrived. Jaime, Jim, Matilda, Megen and Melvin arrived on horse. Jaime made arrangements at the inn and stable for the care of the animals and kicked back to wait for the wagons out on the hill.

Megen and Matilda went to see the sights in Nace. Jim just declared himself to be a 1st level ranger and needed better supplies, so Melvin joined him on a shopping excursion.

The players were given several hints that something was amiss, and everyone but Jaime went to check out the "problem". The denizens of Villa quickly came to the conclusion (click for last pre-session update) that Guilbert should be sent north for trial and execution. Ortaire would be quick marched south to Nace for a mini-Triumph then sold in to slavery.

The four raiders in town were not too pleased by this. Ortaire could rat them out. The elven warband also encountered the sad Triumph over Ortaire, and were thinking of doing something about when Megen noticed them.

The players have an issue with this campaign in respect to the status of non-humans. They have been told elves and dwarves are evil enemies, but they just don't believe it. I decided to let fun and intrigue rule the day and the elves bolted as soon as she pointed them out. The players pursued them using a set of racing min-rules I invented. It was a chase as opposed to combat, which both amused and frustrated the players. It made them believe that the elves were shadowy antagonists without ham-fisting it. The players are probably not inclined to kill off elves for the heck of it, like most citizens of the Empire, which is fine by me. But now they are wary of them.

In the meantime, several other events occurred. All of the characters met up at Five Tree Hill just in time for the wagons to arrive. The raiders also came to Five Tree Hill to see if they could recruit help to free Ortaire by force or maybe just kill him to keep him quiet. Neither was a good plan for the raiders. 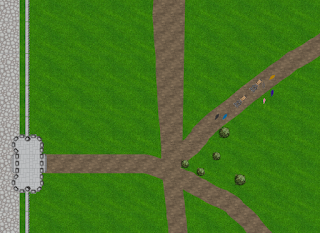 In the final act, the characters had not identified the raiders as such, but believed they were cut-purses or something and watched them closely. At this point, all players were playing their main character plus at least one NPC. It takes a load off of me, plus they seem to protect the NPC's better than I do.

Queue up the finale. The Coven of Ash are the self-appointed defenders of the Empire. They are much higher level than the characters. I figure, why would a high level antagonist hide from the player characters when they have an advantage? This is the opposite of respect and should be every big-bad's operational standard.

The Coven has walked right into the midst of the party, invisibly. As the party passed near the raiders, Caecilia, the youngest of the 3 witches, dropped her invisibility to cast Stinking Cloud on the raiders. Her intent was to set up the party as aggressors against the town and cause them all kinds of problems when they try to re-enter Nace.

The Coven knows who and what the raiders are and thinks of them as useful pawns. They also know that the player characters are agents of the Emperor. And the Emperor intends to upset the "natural order of Empire", which cannot be allowed.

We rolled for surprise. Guess what? 6 siders either hate me or love me*. No one was surprised by Caecilia. The player covering Melvin was living it up by doing some real role-play. He was eating an apple with a knife and managed to hit Caecilia before she could cast.

Foiled, the other two witches helped Caecilia escape by invisibly tormenting the players, guards and raiders. The guards and raiders lost morale and slammed the gates shut. The players managed to convince them to open up, but only after suffering several rounds of invisible high jinx at the hands of the witches. Wails, loud claps and pokes sent the oxen into a tizzy and annoyed the players.

The party ended the session in front of a warm fire at the inn, with mugs of beverages to sooth their nerves. The players seemed both frazzled and amused.