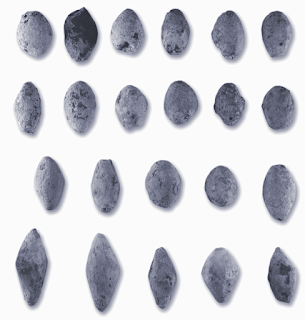 Bullets of Impedance are magical sling ammunition. They are usually found in groups of 5 or 6. They are +1 weapon weapon to hit, but impose a magical effect instead of damage.

When a target is struck by the Bullets of Impedance, a maelstrom of wind afflicts them for 1d4+1 rounds unless they save vs. magic. There are 3 effects to this magical force. All attack rolls are at a - 1. Second, any spell current being prepared is lost and any attempts to cast a spell are hampered by the blast of wind. The third effect is actually beneficial to the target, their AC is improved by one against melee attacks and by 2 for missile attacks.

If a spell caster attempts to prepare a spell under these conditions, they will find the task impossible. They will not "lose" the spell as they can't even start the process.

While described as a wind, it is more like ghostly hands pulling and pushing the victim around unpredictably.
Posted by Phil Viverito at 12/25/2019 08:55:00 AM