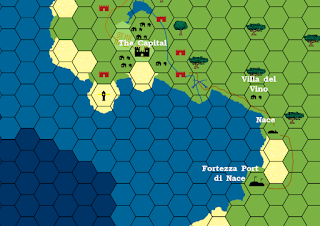 Ah, the campaign will continue in 2020. I've briefly spoken with all of the players and their primary concern was not getting killed by the Coven of Ash.

Well, that isn't a big concern on my part, but I can see how it bothers the players. They will be meeting with a Senator, either under hostile or friendly terms very shortly. He is a target of the Coven of Ash, he knows a fair bit about them, so he can explain them to the players. I have interjected the Coven as a means of making the town seem alive with the obvious benefit of having the characters interact with something very nasty early on. I don't want to surprise them later with something out of the blue.

I had hoped the characters would hop on ship at the next town, but they haven't taken the bait. In fact, they have refused the bait. Fine.

The ship has sailed on my main antagonists, the raiders. The players are clearly planning to head inland to avoid and frustrate them. The players are seriously pissing these guys off by showing up in the coastal cities and settlements, which makes the raiders believe they have a play at them, but then the party drifts inland. At some point, I am going to make the players aware that their behavior is saving many cities and towns from a good sacking.