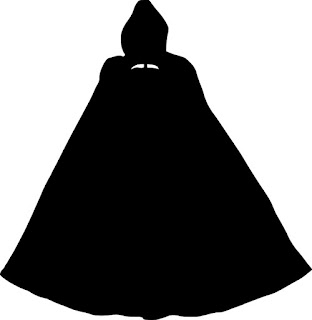 The Cloak of the Magi is a dangerous defense for a character to wear. This is a leather cloak imbued with the essence of a demon. The demonic power contain within requires that the owner not wear other magical defenses such as rings, bracers or any other device that confers a bonus to AC.

In exchange for this sacrifice, the Cloak acts as AC 4 armor. Second, the demon will ask the wearer to cast a spell at it. The effect casting a spell into the cloak is to create a magic barrier between the wearer and damage. The barrier will have hit points equal to twice the level of the spell cast at the cloak.

Once empowered in this way, the demon can defend the wearer against critical damage. If struck by a natural 20 or maximum damage, the cloak will strike out at the attacker. The victim is entitled to a saving throw vs. magic spell. The attack does 1d6 hp per round and the cloak will attack until the target is killed or makes a saving throw.

If the victim passes the save, the Cloak will turn against it's wearer attacking for 1d6 points of damage unless they make a saving throw. The Cloak will only make one attempt on it's owner's life. Passed or failed, the wearer's saving throw or the death of either the wearer or his or her attacker will depower the cloak until another spell is cast into it.

Note, if the character is struck by an item for damage which has no obvious source, the cloak will trigger it's attack sequence on the wearer unless a saving throw is made. Examples of damage which will trigger an attack are: magic spells cast from beyond visual range, a dart trap, falling debris, etc. Damage that are natural consequences will not trigger an attack. For example, poison ingested, fire, and falling.

Empowering the cloak "charges" the cloak for 24 hours. The barrier against attacks is not an increase in the user's hit points, it is a distinct thing separate from the wearer and the cloak. Casting a new spell into the cloak to recharge it will cause the barrier's hit points to reset to the last spell level used. The cloak always has a AC of 4, whether it is charged or not. If the wearer refuses to remove other protective devices, the AC bonus of the Cloak is nullified.

While magic using characters benefit the most from this cloak, any class can wear it. The cloak will only accept a spell from the wearer, someone else cannot charge the cloak up for the wearer.
Posted by Phil Viverito at 12/25/2019 09:53:00 AM