ORSIC Module Review - SM12 The Trials of a Young Wizard

A little while ago, I downloaded Simon Miles' SM00 A Traveller's Atlas of Dunromin and the Land of the Young. He publishes under the name Dunromin University Press, which has it's own website. I found it to be an excellent read even though I play a fused version of Basic D&D and AD&D, the OSRIC information seemed completely transparent in form and function. I feel like I could run this campaign setting with a couple of rule sets with little modification. Oh, and the artwork was spectacular. 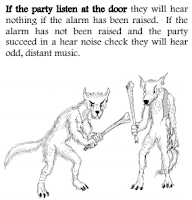 I wanted to see how the rest of the series holds up so I downloaded SM 12, The Trials of a Young Wizard. The production values are just as high in this book as SM00, however, being a module, it doesn't show off Mr. Miles' artwork as much. The maps seem to be a fusion of old school and modern styles, where I actually can't tell if they are wholly digital or a mixed media.

One of the surprises in this book is the fact that it's a single module, it's actually 3 books in one. The titles are The Lost Son, The Return of the Cauldron of Millent and Murder at the Red Barn. Nice! Key information for the DM is bolded and the text boxes are infrequent and spare so that a seasoned DM has space to add flavor while giving a new DM important info to grow from.

The stories are linear from one adventure to the other, but the wording leaves wiggle room so that players can have their PCs recover between them. The second adventure begins with the line, "It's not a big deal really". So, feel free to recharge those PCs with a little R&R.

The mechanics of each story or module in this three part set take into account the character's limitations. The first is not particularly dangerous, figuring the PCs are low hit point starters. I would think that seating 8 players at the table would work better, and I am glad to see the module assumes this from the get go. One of the biggest changes from Basic D&D to modern rules is the assumption that there will only be a DM and 4 players vs. a DM and any number of players plus their NPC retainers. This is one of the reasons I prefer OSR and the older original stuff to the otherwise fine rules of later editions.
Posted by Phil Viverito at 12/26/2019 02:39:00 PM