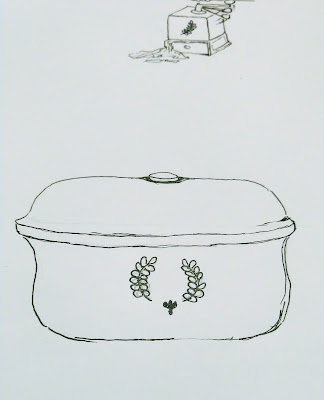 The Baker's Vessel is another magical product found in the homes of the very rich. It is a large earthen jar which when filled with dough, will produce bread on it's own, without leavening agents or external heat source. Each Vessel will produce one loaf of bread per hour, typically enough per day to feed 10 or 12 people.

To function, the Vessel must be placed in a designated space. This is usually a counter top, but could be anywhere chosen by the owner. Multiple Vessels will not function in the same building or property, which is why this product is a household item and not a commercial or industrial product. For example, if one owned a house with a garden shed, placing a Vessel in each building would not work. Only the first placed and filled vessel would work. If somehow one contrived to place and fill two of them simultaneously in two different buildings on the same property, which one worked would be random. One exception is in apartment buildings. Each apartment's Vessel would function normally, so long as the renters are of different families and are separated by a door.  Many people have tried to make this work on an industrial level and these quirks prevent it. The Vessel somehow knows if someone is "gaming the system".

When in operation, the Baker's Vessel will turn red hot. This can be used to warm a room, but is not a fire hazard. Touching the vessel conveys the power of heat resistance, but curiously, people will find the vessel impossible to lift when in operation. It cannot be tipped, opened, or otherwise moved while working. When the bread is done, the vessel will cool to room temperature instantly, while the bread inside will remain hot until removed. This magic prevents decay and molding.

Some cultures have special Baker's Vessels which produce stacks of flat breads instead of loaves.
Posted by Phil Viverito at 12/22/2019 09:29:00 PM