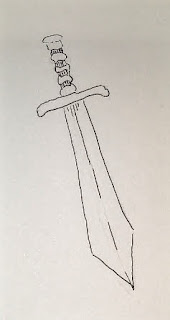 This week's item is another sword. It has a special purpose from which it takes it's name: Libertatem or liberty.

It is a +3 gladius, or short sword. It is +5 vs. undead. Libertatem has the special purpose of freeing slaves and freeing captives unjustly imprisoned and has a bonus to strike undead and animated dead as a side effect.

The sword has one primary power - to heal once per day. Libertatem has one special purpose power: disintegrate. The nature of the power is limited to specific items but nearly unrestricted in usage. When the sword comes into contact with non-magical bonds, it will disintegrate them. Once per day, the disintegrate power can be used over an area 25 feet in radius freeing many bound people at a time. It can cleave magical bonds on a to hit roll. If the holder is bound, only the pulse effect can free them from non-magical bonds, unless they can contrive away to get the sword out and touch their own bonds.

If confronted by a person who is compelled by a charm-like effect, the sword will glow and smoke in frustration. The holder is entitled to a +5 save verses spells which compel, such as charm or command. If the spell is successful in affecting the character, Libertatem will either grant or refuse the bonus to hit, depending on the circumstances. In extreme situations, the sword can come into conflict with a charmed character and escape their grasp.

Libertatem has no power in a court of law, so long as the law is actually being followed. If justice is perverted in the court, the sword will literally smolder and glow. This is merely a show of force, it does not actually generate heat. The sword will use telepathy to make this determination. It is not particularly good at judging at relative justice, such as a goblin court of law and may go silent in these cases.

The sword radiates a magical and good aurora. Casting a detect alignment spell on Libertatem will not reveal an alignment, only it's purpose of liberty. Strangely, the sword will allow itself to be held by anyone who values freedom, justice and/or law regardless of alignment. It has clear preference for demi-humans over humans.

Libertatem has the ability to speak human (Latin), common, dwarven and halfling, in addition to using telepathy. Libertatem chooses to communicate in a very limited fashion, often in single words or short phrases, which can come across as bossy.

The sword will never express conflict in the form of adornments, the shedding of other magic and weapons, seeking creatures to slay, payment, or anything else that would restrict a character's freedom. It will try to talk it's way into a better characters hands, but only when a conflict exists.

Only those who actively subvert the law to unjustly imprison or enslave cannot hold the sword. If confronted by undead, the sword will allow any living person to pick it up and use it for as long as the immediate danger exists.

This weapon is close to being an artifact. The creation process required four wishes. This weapon is dwarven, and all dwarves are proficient when using it. The sword was deliberately forged as a traditional human weapon, as it was felt that a gladius would rally humankind to it. 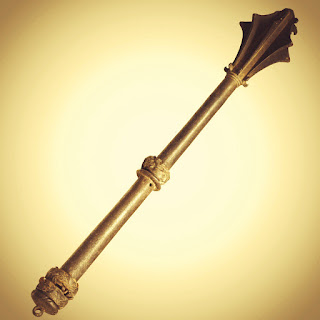 My sigil-etched black Ora mace is sort of a disappointment. I thought it would flare, but it doesn’t because it has been uncursed. Pity.
However, today Serendipity was able to ensorcell it. Right now I just have a level one temporary ensorcellment, but soon I shall have a permanent cast on it.

Magarven is lucky. He has found three rune staves in three weeks, bringing his collection to 4 four.
He first is a blackened orase runestaff, which is +20 and ensorcelled.
The second is a deringo runestaff that carries two different enhancements. It adds +2 to my mana and +6 to Dexterity. It has an odd bonus of +14. It is currently fully charged.
The third is a baby blue kakore runestaff, which adds to my mana regeneration. It is also ensorcelled. This one has bonus of +9 and flares with fire.
The last and most recent discovery is a banded faewood runestaff. It does not appear to have any special statistics other than the +20 to defense.
Pretty soon I will need a golf bag for all of my staves.
Posted by Phil Viverito at 3/20/2016 11:28:00 AM No comments: