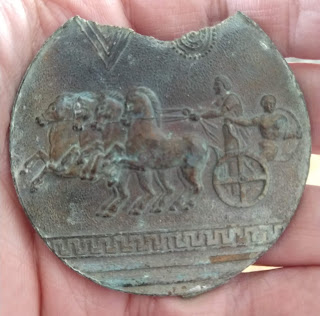 The Equi Phalera is an award given by the Eqiotes order to a man or woman who actions save the lives of those in that group. The endangered Equites would vote to make the award and the device is then constructed by the priesthood. Non-equites can receive the award and become an honorary member. Extreme bravery or very unusual circumstances could elevate a non-equites to that class which includes to the gift of land, money and a horse. These devices are silver, not copper.

The design on the Phalera told the story of how that person received the award. The Phalera is typically made of copper. Silver Phalera can be awarded for extraordinary actions. Gold devices are profoundly rare, usually less than one per life time of the Emperor or Empress and are award by them alone. Due to the uniqueness of the award, it can take weeks or months to receive one.

The device gives the wearer a benefit +1 to all actions on horseback, including attacks. It also gives the user an excellent ability to ride and care for horses as if they were the most skilled equestrian. After a year of using this benefit, the wearer will actually obtain horsemanship skills to this level through practice, regardless of the possession of the device. If the wearer's mount is required to make a saving throw, it is done so at a +2. In the event that the mount is not entitled to saving throw, this device will allow one. This benefit may separate the mount and rider's die rolls, to the benefit of the horse.

If the wearer dies, the symbol's magic is broken and the loop securing it shatters. It will slowly tarnish as pictured above. These tokens are unique and valuable for reasons of honor, especially in the broken form. If recovered and returned to an officer of the Empire, a reward of 100 gps will be given. If given away by a recipient, the Phalera will lose all powers within a year and a day. If stolen intact from a recipient, they will tarnish and lose power immediately. Additionally, if the thief attempts to mount any sort of equine, it will refuse. The mount will then flee. This includes warhorses and other magical equines. This curse is permanent short of a wish. It may be ended by return of the Phalera to the proper authorities or owner AND remove curse is cast on the thief.