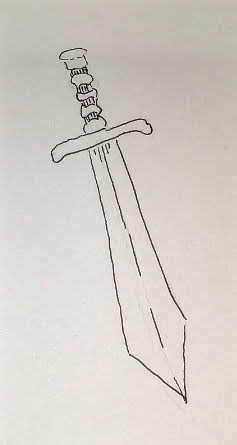 Magic swords are special in my campaigns. In the various rule sets +1 swords are denoted as special, but aren't the first magic weapon the characters get their hands on. These special weapons and tools are found right in the equipment lists.

Silver daggers, holy water and symbols, wolvesbane and garlic are all magical weapons. So why can't a player purchase a magic sword right from the get-go?

Because it's annoying and unbalancing for players to get a bonus right of the gate. In my campaigns, I have a system in place to limit the use of magical weapons.

Being a history buff, magical equipment in my campaigns mirrors the idea of Cursus Honorum from ancient Rome. Sulla was an exiled Roman who managed to set himself up as dictator for life. Since his ultimate plan was to step down from power, he set up the Cursus Honorum to prevent other people from making the power grab he did. Basically, he set up a system of term limits, age and rank requirements for every level government. If one wanted to be a Concul, one need to be 42 years of age and must have held the rank of praetor. Every rank on the Curus Honorum had criteria for eligibility.

Although not intended by Sulla, the Cursus Honorum created a concept of superiority. This came about when people coming up for office were elected to that office in their very first year of eligibility. This was referred to as "in your year". A praetor who was elected in his year put on the airs of being superior by virtue of nailing his election to office the first time he was eligible. He was better than a praetor who was elected later in life.

Anyway, back to magic swords. In pretty much all versions of D&D actually have this concept baked in. On the to hit tables, characters are sorted by levels and their relative combat effectiveness. Fighters beat clerics who are better than the lowly magic user.The tables prefer actual skill (level) over a magical weapons. Each bracket improves the to hit roll by two. So a 3rd level fighter with a +1 sword is not better than a 4th level fighter with a non-magic sword. The only negative for a higher level fighter with a non-magic sword is the ability to hit magical creatures.
In an effort to get around this in my campaigns, I count silver weapons as magical, whether or not they impart a bonus or not. In this way, a high level character can hit magical monsters with silver, rather than a magic one. I have to do less adjustments on my monsters and encounters, because I can just follow the to hit table to determine how hard the event will be.

An additional house rule is, one must have "ranks" necessary to hold a plussed weapon. Anyone can hold silver, but characters must be within a specific band to hold a weapon with a bonus and of a higher band to use it. Sort of like, "in your year".

I like this schedule as a first level fighter could be given an heirloom +1 sword but can't use it. They don't need to search for a great weapon, they have it.
At levels 1-3, they can merely carry it. At level 4, they can use it. The sword will refuse to be drawn for low level characters. If the character somehow figures out a way to draw it, it operates in reverse in the hands of the unworthy. It imparts a minus. This simulates a battle of wills between the magic of the sword and the would-be wielder. In the case of an heirloom, the character is fighting the spirit of the former owner(s) for control. It still counts as magical, even if the magic is a detriment to the player.

This method also creates a game logic to specific tools. Characters, especially fighters, have a mechanical way to assess weapons which is linked to the settings.

(I have all kinds of wiley player who find ways to get swords out of containers. I'm ready for them.)