The Symbol of Sol Invictus appears as a simple brass device, perhaps an ornate hairpin or some sort of clasp for a cloak. The device is actually much more than it seems. To be functional, the Symbol may be accompanied with a loop of metal, a leather strap or some other means of use. This secondary item is non-magical and does not effect the power of the device in any way.

In the early history of the Peninsula of Plenty, worship of the sun or Sol as a god was very common. Sol was not personified as in other religions but was viewed as an all-powerful beneficial force for good and order. In the third century of the Empire, the title "Incivtus" was bestowed upon the Emperor after his victory over a particularly vicious series raids by the Northern Tribes. The Emperor had been truly "unconquered" on the field of battle, but he resisted the title to defer to the gods he worshiped. It became common for people to add the honorific to heroic, beneficial, lawful and good deities, including Sol. 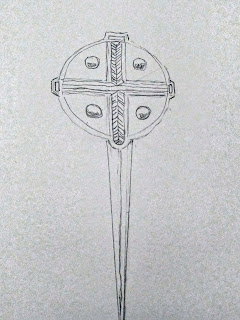 Priests of any sect may use this object as long as they meet the alignment requirements and the deity of the priest is not strongly opposed to healing or sunlight. For example, a lawful evil god of darkness will oppose using a Symbol of Sol Invictus while a lawful evil god of power and war will not have a problem with it. The priest in question may start referring to their god with the post-title "Invictus". The Symbol of Sol Invictus is merely inoperable for people of certain alignments, it will not harm them to handle the object.

An unadorned Symbol has three magic powers. First, it will heal 1d6 hit points once per day in the hands of a good or lawful person. It will heal any creature of any alignment, except undead. The recipient of this healing will be struck by a beam of light, which means the device's power is line of sight. To trigger this effect the holder must think of good or beneficial thoughts of or for the recipient.

The second power is to smite Undead. They will suffer 1d6+2 points of damage from this "healing" beam. In the case of undead the beneficial thought is a desire for final peace, freedom or resolution.

Once either effect is triggered, the symbol will glow with the strength of a torch until the next sun set. This effect could last hours depending on when the power is used. It may be covered, not extinguished.

The symbol can be used to heal one person and smite one undead creature once per day. The Symbol has no charges, only the daily limits on each power. The glow is either active or not based on the usage of the other powers.

All of these of these symbols have 3 rough, bar shaped impressions on the rim. If a diamond worth more than 10 GP is placed in any of these slots, the device becomes much more powerful. Placing the gem only requires contact, it does not require a jeweler or skill. The gem will assume the shape of a bar. For each diamond added, the Symbol will heal and smite one more time per day for a maximum of four times each. Additionally, the brightness of the symbol will increase from the hazy fire of a torch. One diamond will flood an area 20 feet in radius with light. Two will cause the symbol to glow with a rich yellow light for 40 feet. 3 diamonds cause it shine as full daylight out to 120 feet.

An odd side effect of this Symbol's power is, if the holder attempts to heal someone who does not need healing or attempts to smite a non-undead creature, it will still glow. This glow will attract injured people of lawful or good alignments for a radius of 1 league, if any. As soon as the injured person moves into the line of sight of the Symbol, they will be healed instantly. The beam of this power will reveal the recipient and they will be compelled to thank the holder, so long as there is no dire threat preventing it. The device desires to be used for good and order, but will not compel a person to risk themselves or others to pay thanks to it's holder.

While the device's primary purpose is healing humans and demi humans, it can be used on any creature such as animals, natural or supernatural. The glow of the device never attracts such beings.