A rumor is spreading about the 12 stone horses. Up the road and around the left hand bend is a meadow full of stone horses. They were not there last week. The statues are strange, each life-sized stone horse is posed as if running. The 12 horses complete a circle in the middle of the meadow, as if the herd was running around the center. What is particularly strange are the hoof-prints. It's as if the statues thundered in on their own. 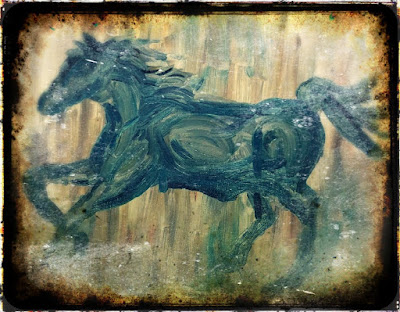 Yesterday, they found the thief buried in leaves at the edge of the meadow. He is rough shape, he can barely talk. He said his friends had to go, they left him for dead. Scoutie said, "He buried himself to die." There are faint tracks of men and dwarves, and perhaps a halfling at the edge of the forest. But no tracks around where the thief was found. The thief is weak and delirious. He muttered strange things:

"The fetlock... 'ware their breath."
"Your power is theirs."

"Speed is life. Speed is death."

He is deeply sleeping, and if the gods are kind, he may recover. But not today.

The horse will desire to run and will take the person to the destination of their choice, within a range of 12 hours. The horse will move over any terrain at 30 miles per hour for a maximum range of 360 miles. If the player has no destination to go to, the horse will run for 15 rounds and return them to the starting point. In either case, the horse will let out a nicker and exhale the character at the end of the run.

The stone horses are unnaturally surefooted, they never fall or slip, and can run on any surface such as water or lava. They are effectively weightless. They do not fly or sink while in motion, but will not end their run on an unstable surface. They cannot inflict damage on themselves as a consequence of running. The stone horses can absorb up to 50 points of damage from blunt forces before being destroyed. Sharp weapons do but a single point of damage. Natural forces such as water or fire cannot damage them, but magic will. Magical attacks on these statues must be capable of damaging a stone item. Destruction of the horse disgorges any character inside.

Players within the stone horses are immune to damage, scrying, charm, sleep, etc. as if they were made of stone. People using the horse only has a vague sense of their surroundings and cannot use any of their abilities, natural or magic.

If hit with a stone to flesh spell, the horse will permanently come to life. If it is carrying a character, that person will appear on the horses back. The horse will behave as a loyal steed for them, for life. If the spell stone to mud is cast on them, the horse will deform but maintain it's shape. It will continue on it's journey at half speed and return to stone as soon as the spell duration expires. The spell passwall is devastating. It will cause the horse to momentarily vanish and the person carried will be disgorged from the space the horse once was, at speed. Worse, the CASTER must save vs. Death. The effect is as if the caster was struck by a heavy boulder dropped from a great height. There will be a splash. Once the spell duration ends the horse will reappear, usually behind the spell caster as if they ran through another dimension. Wish and alter reality can damage the stone horses, but the attacker will find that no equine will allow them to ride afterwards. Using wish or alter reality to benefit the stone horse causes no ill effects.

Characters with an enhanced score will gain all of the bonuses a high constitution normally conveys. If a character gains temporary hit points they can only be lost through damage or by the passage of 24 hours. Injuries suffered by the characters from this pool of temporary hit points are free. The damage will be magically transferred to the stone horse and will appear as weathering. This is repaired by the next rider's stamina.

These horses may be used once per day, however due to the constitution loss most people cannot not do this without magical enhancement or healing. A second rider will be required to wait the 24 hours from the horse's last use.

*Most people would call a fetlock an ankle, but is more like a knuckle.

I am obviously thinking of writing another and Gnolls might be the subject. Please let me know what you think in the comments.
Posted by Phil Viverito at 4/20/2019 11:21:00 PM