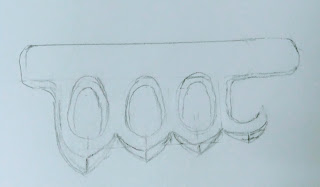 This week's magic item comes in pairs. The Obice Cardeam are a pair of knuckledusters or as the Romans called them, cestus. The name Obice Cardeam means "Cardea's Barrier".

They come in three forms, one for warrior types, one for magic users and one for clerics. All three types count as +1 weapon, however only the warrior's cestus has a +1 bonus to hit or damage. Each one does 1d4 points of damage plus any other bonus.

The clerical version has a divination power, once per day they can identify a cardinal direction (any) or point the direction to the nearest holy site of Cardea. If used inside a shrine to Cardea, they will point to either the closest larger or closest smaller site and the wearer will be aware of which it is. In the picture, the device is shown to have points. These are not blades or sharp edges, so clerics can use them.

The magic user type has the ability to cast Knock or Wizard Lock a door once per day. Note, wizardly types using these weapons will not be able to cast magic spells as they are iron and they restrict finger movement.

All three types have a special power when defending a threshold - they grant the user regeneration at a rate of 1 hp per round. To trigger this effect, the user must be defending some sort of entryway with a clearly delineated threshold and must be within 50 feet of it. The threshold must be an item that has been constructed or refined to qualify. For example, the mouth of a cave would not count but if that opening was decorated or carved to show the difference between inside and outside, it would count. All doorways count, even if the door has been removed or destroyed, as do gates, portcullises, etc. Mere holes in walls do not count. Magical gateways, such as those generated by spells do not count due to the temporary status.

Monks may wear these items, however, they do not increase the damage done over their normal hand to hand damage. They merely convey the ability to strike creatures which require a magical weapon to hit. In the hands of a monk they are equal to a +3 weapon as monks have special knowledge of hand to hand weapons.