House Rules - Swords and Life Stealers - "Well, Mike. I calculated the odds and I went ahead and did it anyway..." (Part 3) 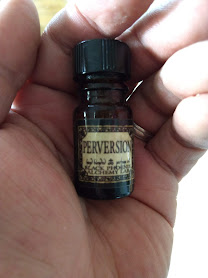 To the left is one of my favorite colognes, called Perversion. My other favorite is called Villain. However, at the game table, I hate being called either one of those words.

I used to be afraid to use level or life draining creatures on my parties, but I got over it with a couple of house rules. By the way, you should probably pick up a copy of Ravenloft if you like sucking the life out of your players.

The first house rule was on silvered weapons being an equivalent to magic weapons. That goes along ways when fighting the undead horde. Players still go through that whole "I'd be a fool to walk in there..." but at least they know they'll have an effective weapon. However, sometimes that isn't enough to get them to bite.

I have a trick to life stealing that I unload on players. Life draining creatures live between worlds, their grip on this one is temporary. If the party kills the life draining creature, they get their levels back the next day, no saving throw. This is different than 3.5+ version of saving for recovery, which happens because it's the next day.
This one is give and take, and I love it. Imagine the look on the player's face when they expect that they're going to get those levels back and end up with this discussion:

"No, you don't."
"Oh, crap. That thing is still alive!"
"Eyup."
That one is as stressful as fun. It can really crank up the intensity of the game because now the players have to race back to the monster's lair to kill it before it can heal up. If the creature heals back to 100%, the loss of levels is permanent. Usually, the players have the means to heal themselves up as best they can, but the time limit stops them from padding the party with extras and alts.

In the case of characters being turned into a life stealer themselves, it gives a brief window where the effect can be broken. Healing back up to full health is necessary immediately afterwards, so while it's fun, it's also a nightmare for the player(s). They get special powers for bit, but at a cost with a threat of death.
This idea of having a life draining creature exist between two realms also creates the expectation that anything that travels the planes is a life stealer. Devils, demons, etc. all have this power in my campaigns. Usually it's in lieu of a different attack and I use it for drama. The basic criteria in my campaign is that the plane crosser must be immortal. Life stealing githyanki would be way too much, but it does explain their fancy swords. They probably encounter this problem all the time.

Another quirk of this system is disruption. If a player strikes the life stealer with a weapon or spell that is 100% effective, that creature cannot drain in that round. It is also weakened to the point that non-magical weapons can affect it for the rest of the round. Silver arrows are life savers in this scenario, as are spells. Tick-tick-tick, the clock is running! Make those initiative rolls or beat feet. This makes those Lost Boys style combats incredibly likely and reasonable, which is also very fun. Just make sure you have a good map for the players so they can run in and out of trouble easily.

I have not used the gimmick from Lord of the Rings where a character is immune due to some sort of basic definition, like being a woman or a hobbit. I'd like to, but that would cause a gender-race race. As funny as that is, the gag would be all used up by the ridiculousness. Play the character you love, not the character with the most mechanical advantages.

(I have a ridiculous gender crossing story here, and let me tell you, it was far less fun to be a participant than documentarian. It was painful because everyone's assumptions made for hard feelings.)

Since the players are generally aware that if they kill the life stealer they could get their levels back, they go at it like the heroes they are. That is a lot of fun because they walk off extremely battered, but the next day, everything resets.

A lot of this is would not be possible or practical if not for one other thing that I do at the table. I don't always hand out experience at the end of the session. If I did, there would be a problem with ending a session after draining event. The characters would accumulate experience after the drain, then lose it if they get their levels back. That wouldn't be any fun and creates book keeping nightmares.

I hand out experience at points where there are long pauses in the action, rather than at some real life time measurement. If they characters are waiting out a snow storm, training or researching, they get their experience dump at the same time. It puts the players on an "off topic task" at the table in lieu of boredom. I can tell stories as they do paperwork.
It also removes the whole concept of "just 10 points way from the next level" occurring via a break from the game where the player is inclined to cheat. I avoid this by throwing out a mini-event for that player or players so they don't feel like they needed to cheat. I'm not inclined to give away the milk for free, but if I can play out a special one off event, I will because that is enjoyable.
Click here for part one and click here for part two of this series.
Posted by Phil Viverito at 8/23/2020 08:30:00 AM