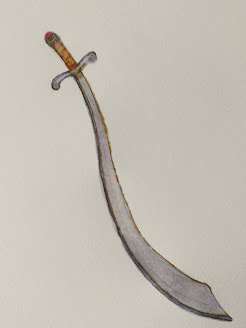 Magic swords and other weapons are special in my campaigns. In my last post on magic swords, I wrote about allowing silver weapons to count as magical weapons and limitations I place on true magic swords.

One of the side effects of allowing silver weapons to count as magically, they can be used to create "character feature permanence". There are a couple of ways of doing this, if the player wants his character to be "that axe wielding fighter". To be that, they always need an axe. Do I force them to be on the look out for magical axes in the future, or do I allow the axe to progress with them?

Seeking a specific weapon is how Fritz Leiber did it with the Gray Mouser. Scalpel and Cat's Paw were merely names that the Mouser tagged various weapons with. They changed, but not really, through out his adventures. Mechanically, they did the same task as the prior weapon, but were in some way better. Or not, Leiber wasn't really clear if the Mouser was breaking or losing normal weapons, or replacing with better.

While I like this methodology, it places an onus on me as the DM to provide special things. I don't like that because it creates the impression that I am screwing a character by the omission of certain items or it seems like I am singling a character out for special rewards. In some cases, the big prize will not be desirable to the party, it's a McGuffin for something else. I can't make someone's prize sword the McGuffin because by definition, the McGuffin exists for a purpose other than what it appears to be. I could, but that's just mean.

Since I let players use silver or silvered weapons in place of magic weapons, I have a special formula for the pricing of such things. Basically, the character needs to pay the base price of the weapon plus the volume or weight of the silver necessary to make such an item.
"Volume? Why volume?" Good question. If the weights of items are in gold coins and the price is in the same unit, I get a nice formula for silvered weapons, which are merely plated with silver. A dagger costs 2 gps, and weighs 10 coins, so the price for a silvered dagger is 2 gps, 10 silver pieces. That is one merely covered in silver.
If the player wants a dagger made entirely out of silver, volume changes to weight. The character pays the base price of the weapon, plus the weight in silver of the manufactured weapon. So, a silver long sword costs 15 gps plus the weight of silver put into it. It weighs the same as 60 gold pieces, so the player must provide 60 gold pieces of silver, or 1200 silver coins.

This gives me a nice formula for improvement of weapons constructed out of silver. An item can be reforged into a higher bonus weapon by repeating the process, with the only exception being plated weapons. Improving a plated weapon results in a magical copy, leaving a memento of where one has been.
You might want to hold on to that, in case you drop your nice sword. Just saying.

Improving a wholly silver alloy weapon merely has a cost and a time to produce. To go from a wholly silver weapon to +1, the cost is the base price of 15 gps plus the cost of the silver needed, which is again 1200 silver coins in the case of the longsword. The extra silver doesn't end up in the weapon, it is simply materials needed for the special task. It's basically a silver drain, which creates interesting scenarios if the characters can't get their hands on silver for some reason. Like they tried to do this with a suit of armor in a small town. This process is costly, but relatively easy to do if players are selling off treasure.

By creating a standardized way of improving weapons, I create item permanency for the players and a tool for magic users to make magic weapon. This is also a coin dump to explain why experience is equal to gold. It has many features.

(Oh, my wiley players. I will mention that I do use encumbrance for carried items and I have had players request a new weight for their for wholly silver weapons. On paper, gold is almost twice the weight of silver. Since this would be an alloy, I say the weight of the silver weapon is only 80% of a regular one for the purposes of encumbrance. I never let this reduce the cost to make a silver weapon.)