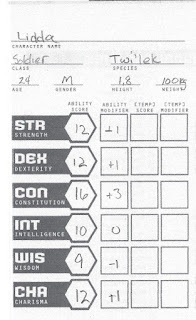 I forgot to post character sheets. It's Sunday and I am working on my Neimoidian bounty hunter, but I would like to share the player's initial sheets.

These are photocopies of a character sheet I had on hand and I rewrote what the players did on their sheets. There are mistakes, either one of the players didn't write in languages or I missed it.

In either case, these are available by hitting the Pregenerated Characters tabs above or from the links below. When the players share their updated sheets, I'll load those, too.

Just to recap, there are 5 player characters. Nonin is a Devaronian force adept with a blaster. Talhana is a Zabrak force adept, also with a blaster. Malta is Rodian scoundrel and dreamer, with a tiny holdout pistol. Dex is a human handiman and fringer with a sporting blaster. And lastly is Lidda. She is a twi'lik solder with more weapons than anyone else. Click those links for the individual PDF files.

The characters have made it to level two, but I wanted to show their initial stats from Session 000.  Click the link for a recap. The short of it is, all of the characters have far more equipment and funds now.

These characters the players created are forcing me to change up the scenarios in Invasion of Theed. In dumping the players on a different home planet, the scenarios can't play out as described. That one I knew. The second change followed by an adjustment was the players wanted to be in a place like the worlds in The Mandolorian. Since they made that choice they changed their minds. They want lightsabres now. Not too hard. The final change I have to make is the final villains can't exist on the players homeworld for a variety of reason, but the primary is, as played the characters would see these villains as heroes. That just won't do. 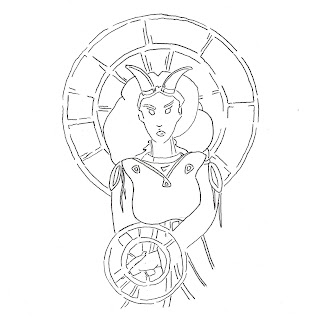