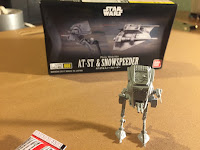 I've been building some 1:144 scale models by Bandai. I have a snowspeeder and AT-ST built. I also have a couple of X-Wings, TIE fighters, two different Millenium Falcons and a few other things to build.

I want to make some ground crew figures and have had difficulty sourcing them. The best I could find was 1/75 architectural figures. They're not a bad fit for the scale, being just a little too tall. I am going to end up modifying them, so I don't mind the off size. I'll be cutting and painting them to look like Star Wars characters.

To get a sense of scale, I stood one up next to the models. They aren't too badly scaled. (Ignore the tape I used as a base.) For less than 10 bucks, I picked up a 100 of them. For the price, they're great. 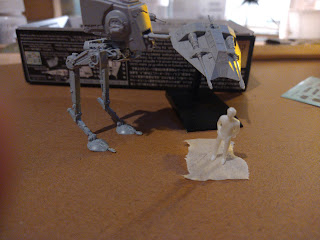