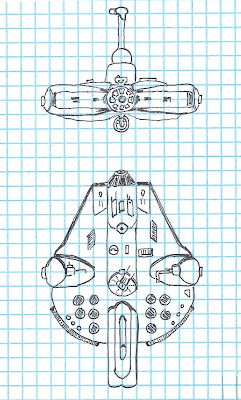 My Neimoidian bounty hunter, La'ow Houd needs a ship. I started working on a rough image for it. I'm trying to get some sense of proportion and I think I got that down.

What is missing is details on the front view. A lot of those lines just don't mesh up. One of the issues is, I work in a place that doesn't allow electronics so I am working on paper and from memory.

As you can see, it has lines similar to the Falcon, but it is not the hot rod that the Falcon is. It has only one gun turret, the radar dish is on the bottom in place of one of the gun turrets and it has a massive cargo hold in the back. I wanted to the ship to be reminiscent of the Clone War ships. To that end, the cargo bay has a massive wing like structure.

Where Han tricked out his ship for speed, this one is customized for cargo. That cargo bay is designed for holding a sailboat. Weird, eh?

As a consequence, this freighter is not very fast or good in combat.

On another note, my next build will be the Millennium Falcon by Bandai. See my Snowspeeder and At-ST builds at these links.