I'm running a Star Wars campaign on the very distant planet of Tankeren. I need to know some stuff about Tankeren to create this setting. 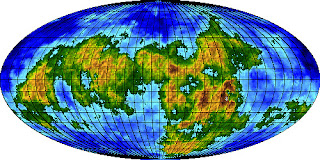 The map was created using The Planet Map Generator by Torben Mogensen. Tankeren is largely Earth-like, just a bit more arrid on land owing to the equaralterial nature of the land masses. The map really isn't that big, its only for show.

What about the people? Here is what I know so far:

Ok, so these people have loose alliances and don't do the representative government thing. What did they have prior to the arrival of the Separatists? A mess. What can I flesh out from these details?
Quite a few things actually.
Each tribe has an area called a Glide and two leaders called The Bearer and The Breaker. These are short hand terms for "The Cup Bearer" and "The Bread Breaker". Traditionally, the Breaker is a woman and the Bearer is a man, but that's all ancient history. It really doesn't matter who leads in the colonists opinion.
Ok, what is a Glide? Initially, tribes controlled the land they lived on. But since these people were always technologically advanced, it made little sense to limit the tribes area based on where the houses were. They were also highly mobile using their TNK-101 transports to get around and as supplemental housing.
The standard of a Glide was defined as how far a TNK-101 transport could safely glide in a disaster as per the specification booklet. It's about 603 KM (375 miles). This solves the problem of islands having one tribe per isolated landmass. Anything outside of the circle is deemed wilderness and the wave like nature of colonization caused many ribbons of wilderness between most settlements. When Glides are physically adjacent, a large landing strip and tower is built at that contact point. These facilities are used as data control points and as a site for celebrations. They are not militarized. A real world comparison would be an industrial park next to an airport.
The Bread Breaker handles all issues of societal logistics; the distribution or trade of goods, the establishment of Glides, or anything else having to do with logistics. The Cup Bearer is responsible for all areas of social norms; agreements, contracts, honor, law, etc. Notice there is no chief executive or commander in chief. These roles would be taken on by either the Bearer or the Breaker as they saw fit.
A Glide is the smallest area of control, while a Shield is the next level up. The Shield (or Continental Shield) is ruled by a Shield Breaker and Shield Bearer, who represents everyone on that Continent. The highest and least used part of government are the two Lord(s) and Lady(ies), two people who represent the planet to outsiders. These positions are alloted by tradition, economic power and in the past, might of arms. In almost all cases, anything higher than the Cup Bearer or Bread Breaker is a useless institution, having little to no local control of the Glides they represent. These high level institutions are run by the first waves of colonization and have little in common with the average person. They tend to get into fights among themselves which thankfully rarely trickles down to the citizens of the Glides.
There are 4 Shields: East, West, Southern and Islandic. They were colonized in reverse order.
As the Separatists took control of Tankeren, they realized the political situation was more complex than anything they encountered before. Green 5, the lead tactical droid came up with a battle plan to take the planet Glide by Glide called Green Glass Glider or G3xG5. He's a little haughty about his role on the planet. The idea was the droid army would be able to focus on one Glide at a time and this would probably result in a total depopulation of the planet, like a Glassing event.
Green 5 is currently in charge of the droid army and directed by the Lord and Lady of the planet. They are trying to make the droids more like a police force, which doesn't work very well. It doesn't help that the Lord and Lady have different points of view. Green 5 is flummoxed by the wild, independent nature of the citizens. He spends a lot of time preventing his droids from entering combat situations. The current rioting is baffling to him because the rioters only attack droids if no other target presents itself.
Green 5 has some conflicting programing due to the fact that Viceroy Bargel has ordered Five to take instruction from the leaders of the planet and to stop taking orders from the Viceroy. Green 5 doesn't see Bargel's organization as a separate power and the hapless droid often reports to Bargel as a matter of course. When he doesn't, he often shares information with Bargel's bounty hunter.  He has no idea that Bargel expects the droid to get himself and his robotic brethren killed when the Rebels or Empire arrives.
Posted by Phil Viverito at 12/14/2020 08:30:00 AM