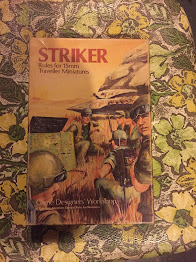 A while ago, I stumbled across a copy Striker by Game Designers' Workshop. Ironically, I thought it was a copy of Tractics which is very much unlike Striker. I have never played this game despite having it on my shelf for decades. I'd love to launch right into a review, but like everything else in the Traveller world, the game is complex.

One of the nice things about this particular game is, it was published in 1979 and is right where I came into the Traveller world myself. For some demented reason, I took a liking to Star Frontiers after playing a few games. My Traveller got put aside, despite having the simplified rules. I can truly say I have nearly zero concept how Traveller works. Either 70's Traveller or today's Fifth edition. So I am looking at 40 year old Striker with fresh eyes.

Striker is a boxed set of 3 classic looking black books. These 48 books are 5 3/4 by 9 3/4 with yellow stripes and text. The titles are: Rule Book 1 Basic Rules, Rule Book 2 Advanced Rules and Rule Book 3 Equipment. There is a fourth 16 page "booklet" called Design Sequence Tables and 3 loose leaf pages of tables, which was described as "six pages of tables". 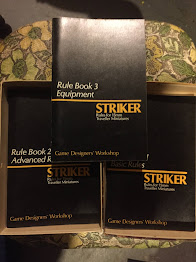 The game used to have a set of dice and I believe I still have them mixed with every other die I own in a jar. Since I have 100 six siders, I doubt I will ever find or identify them. I recall they were smaller than normal dice but my memory could be shot.

I wish I could say, I bought this game at such and such a store way back when but I didn't. Not only did I have my own gaming group, I also belonged to two or three other groups. I am sure that someone gave me this set. I don't have the proof of some one's name written in the books. I do like that best, but I have something better.

My set has hand written notes by an unknown author. This isn't a campaign setting, a set of characters sheets or a battle plan. 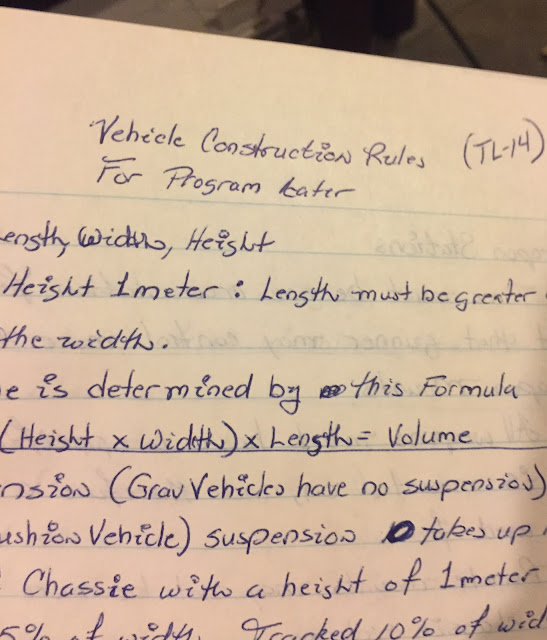 This notes are old, yellowed and I don't understand them any more that I do Traveller. But even if these papers didn't have a title, it would be incredibly clear that someone back in 1979 was writing a computer program to automate many of the instructions from Book 3.

I love the books I have with past owner's names. These notes make this one extra special to me.