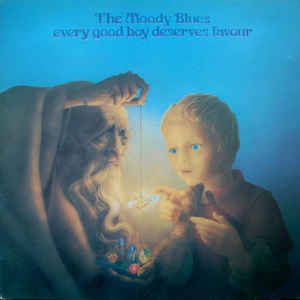 I love mystery and exploration. It appears in all of my games, no matter the genre. It probably goes back to being a kid and raiding my parent's LP collection.

But one record threw me for a loop. "Every Good Boy Deserves Favour" by the Moody Blues. Was it Mom's or Dad's? Why did with have two copies?

It didn't trouble me too much as my parents let me listen to it over and over again. They had a lot of great music which rubbed off on me.

The song, Procession was a clue, but one I could not decipher until 2001, 30 years after it was released. In August, 2001, my wife and I got married and finally moved into together. Anyway, we moved into a tiny apartment and didn't really didn't step foot outside until January of 2002.
9-11 happened. I was working non-stop at Mattel, Kitty worked nights at the hospital. A December snow storm shut us up for weeks.

My wife and I really got to know each other on a couple of different levels. One of those was through music.

We both love music and our combined CD collection was over 1,000 discs. There was only one duplicate: Pink Floyd's "The Division Bell".

This answered the question of who owned "Every Good Boy Deserves Favour". Both Mom and Dad. That was their duplicate CD, in vinyl form.

While this is supposed to a post about games, I find there is an incredible parallel between "Every Good Boy Deserves Favour" and "The Division Bell". A lot of the same ideas run through both of them. Communication, destruction, feedback, discourse, discovery, creation, sharing.

I've never played both albums back to back, but each favours these ideals. And they mirror my main themes and goals of game play.
Posted by Phil Viverito at 8/27/2020 06:32:00 AM