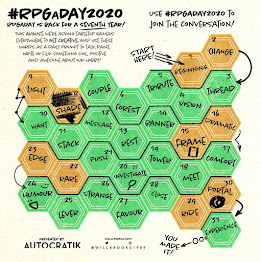 #Frame.
I wish New Blogger wasn't so glitchy with positioning pictures alongside text.  Anyway, today is frame and I only have 12 minutes to write this, otherwise it will be tomorrow and that is dramatic.
Frame, is the border of something. In RPG's the frame is the divider between you, you players and the rules and what happens in the game. If the frame says "fantasy", you get hobbits and dragons and other stuff. If your frame says "sci-fi", it's all bullets, gees and no aliens.
Wait... no. Yes, that is the wrong definition of "sci-fi", but it is one of many frames.

In my campaign, the players exist in a damaged world. For the most part, magic has over taken technology, but technology still exists. To a degree, anyway. I have marines and elves living in the same place, thanks to the frame I have developed. It really doesn't matter that I play a mashup BX and AD&D, it can simulate fire arms and technology.

I find it interesting that as a DM, your frame is portable. My friend Doug had all of us living in Naria for a time. Mark, had a shadow-world campaign, very similar to I.C.E. rules on Middle Earth. What made all of this interesting is, the three of us shared DM duties and our players assumed that our collective campaign was the same place. Mark and Doug disagreed, but I said, "yes, it is."
The non-DM-ing players took the logical next step. My game allowed for styles that encompassed other two DM's style of play, which made it a transitional frame between Mark and Doug's worlds. They believed in all of us like these were real places and things.
It was pretty obvious that I enjoyed Mark and Doug's world as much as my own. The way that they personally framed their stories made me not care that I wasn't participating in a world of my choosing.

Framing is a powerful tool. Better yet, if you can make a DM want to be a player in your framed world, that's an amazing skill.