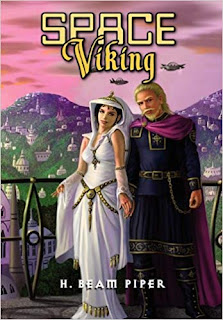 H. Beam Piper's Space Viking inspired many idea in science fiction gaming. There is a reference to it in Traveller, in the form of the Spinward Marches' Sword Worlds.

It is somewhat a post-apocalyptic genre, all action takes place in the Sword Worlds, colonies founded by the losing side in The Big War. In the aftermath, a Federation of planets has collapsed into barbarism and is under siege from the titular Space Vikings.

Trask, the leader of the so-called Space Vikings starts a campaign of conquest and revenge for the murder of his wife.

Space Viking really doesn't break any new ground, but all of the pieces of a classic science fiction story are there. Space Battles, check. Technology hampered by resources, check. Intrigue and revenge, check.

It's a solid read, but doesn't really soar.