Over on MeWe, Matt Jackson kicked off a Dungeon Collaboration. He posted a map over on his blog, MSJx.org and invited us to pick a room to describe. You can follow the conversation over on mewe with the hashtag #collabodungeon and the results on Matt's blog.

Matt declared a free for all while Goblin’s Henchman through out an idea for 300 word description limit, which I ran with. 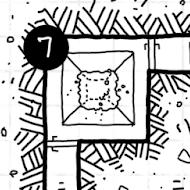 The 300 word description:
Location Seven. The Twins.There are two women, twins, in the pit. They are identical in all ways save one. One women wears a lead ring. When they become aware of the characters, they will both shout out for help. When the characters look in the pit, they will hear the following orders:Twin with the ring: "Kill her! She's a demon!"Twin without the ring: "Kill her! She's an idiot!"They are both at the bottom of the pit and represent no threat to the characters in this state. They are both bloodied and bruised from the fall and each has a blacken right eye.If the party rescues them, they will find out the following information. Twin One, the one with the ring is named Meredith. She entered the dungeon with her friends in search of treasure. She found a gold ring in area 8 and after discerning no purpose to it, put it on. She was pushed by a monster into the pit.Twin Two, without the ring, was a doppelganger hiding in area 8. To take on Meredith's form, she ambushed her by pushing her into the pit. Unfortunately for the monster, Meredith grabbed it's wrist as she fell and both ended up at the bottom. As the doppelganger took her form, Meredith shouted "Begone!" which the ring of wishes interpreted as a command against the monster. Since the doppelganger was in mid-transformation into Meredith, the ring fixed it in that form before turning to lead. The doppelganger is now an exact copy of Meredith.The twins have found combat against each to be profoundly lethal, as they mirror each other's moves perfectly, hence the matching black eyes. They will not fight each other. They will join the party to escape the dungeon.

I'll probably make up stats for Meredith someday, but she is presented as rule set agnostic here.