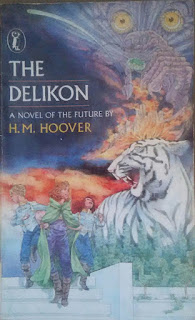 Title: The Delikon
Author: H. M. Hoover
Year: 1977
Pages: 148 pages
Rating: 4 of 5 stars
Ten year old Atla, 12 year old Jason and 307 year old Varina are children in the palace at the time of the coup. H. M. Hoover likes hooks like that, and this hook is fabulous.

Not all that is described is as it is. Hoover weaves a tale of an alien teacher guarding her charges as the world turns upside-down. Her prose is sanitary, succinct as is the world these characters exist in. As a Young Adult book should be as it is meant for children.

The focus of the story is the many dilemmas faced by Varina as she tries to guide her charges to safety. Varina's people have reshaped Earth's society and reshaped Varina to navigate between these societies. This creates a number of problems as Varina protects her charges in a place between two worlds-gone-wild.

This book holds itself against progress as the technology described is either utterly fantastic or totally pedestrian, with solid plot and story reasoning for both.

The Delikon is a drama, pasted on top of a world that could be utterly violent. The reader, like Alta and Jason are effectively screen from the violence of the world, while still being touched by the urgency and import of such events.

The Delikon is a wonderful read, a quick page turner. I am sure you will enjoy it as much as I did.

Some of the best monsters are people. And some of the most intriguing people are villains.

Jon Wilson, of Appendix M put the bug in my head to steal a villain with his post on The Rival Party. These characters are decidedly different, with incredibly cool powers and abilities. I love the idea of a rival party as adversaries.

I immediately thought of a character I want to steal for a campaign. He is the Monomach from Stephen R. Donaldson's Mordant's Need series.

The Monomach is the villain's right hand man, the most skilled swordsman in the lands. As a villain, he is totally one dimensional. He's given a target and then the target dies. Or at least that is how he should work.

He is actually simple enough to build an AD&D character class with little adaption. First, he is a fightman so he has all of the abilities of a Fighter. Second, he has the disguise abilities of an Assassin. Third, he has some ability to heal himself like a Paladin. Finally, he will gain the damage bonus of a Monk. His prime requisites are Strength, Constitution and Intelligence. To get a +5% bonus to exp, he must have at least a 12 in each of those skills. To get a 10% bonus, he must have a 15 in each.

In framing the villain as a character with a class, he can scale with the Player Characters. He can start relatively weak with the PCs and grow from there.

Let's assign those abilities by level.

On creation - +1 to Strength or Constitution regardless of race.
Level 1 - Disguise as an equal level Assassin.
Level 3 - Laying has as Paladin of equal level.
Level 5 - Damage adjustment as per Monks +1 per 2 levels.

What is the Monomach characters limitations?

They are limited to two magic items plus one magic weapon and one magical piece of armor. They are limited to only equipment they can carry, even at home. They cannot backstab as Assassins do. They do not fight weaponless as Monks do. They do not have the variety of weapons of a fighter, they tend to stick to one main weapon and one back up. They don't often use bows. They can ride horses, but can not care for them. They work alone and are likely to strike a "friendlies" as they get in the way like a berserker. This berserker tendency is not a special skill or ability, it is just a ruthless and bloody methodology. They are relatively poor in day to day skills, unable to cook, care for animals or hunt making them reliant on their master's staff for self-care.

This lack of people and daily living skills prevents them from having followers, retainers or constructing a keep, tower or other base of operation. When assigned to retainers by their master, they tend to follow the retainer until a target presents itself.

What would make this type of character too overpowered? A crystal ball and a ring of teleportation. Yeah, I would totally give my evil Monomach a ring and crystal ball.
Posted by Phil Viverito at 8/11/2019 03:50:00 PM No comments: 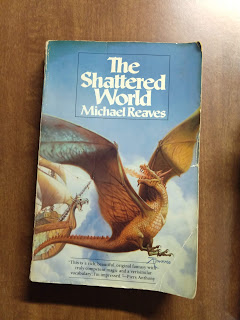 In the back of the Dungeon Master's Guide is Appendix N. These are a series of books which Mr. Gygax felt everyone should read. There have been endless debates on which is best, but these discussions miss the point. They are educational books, ones that broaden the scope of one's own internal story.
I have created my own Appendix, N+ if you will. This will be an ever expanding list of books and hopefully fuel to do some book reviews. Somehow, I envisioned hawking books for Amazon or something, but I don't think so. If the book is important enough to warrant it, I will post links to DriveThruRPG and other smaller, niche vendors.
Posted by Phil Viverito at 7/06/2019 08:50:00 PM No comments:

Wizards rise to battle the Necromancer and reforge the Shattered World or not. Follow the adventures of Pandrogas, the jerk-ass wizard, his girlfriend (?) Ardatha, Beorn the shapeshifter and the totally awesome, but impractical Cloakfighter as they wrestle the runestone of Darkhaven from the demon. Defective, hostile heroes make for an excellent story. 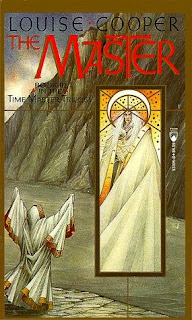 Louise Cooper's 1977 Lord of No Time was reworked into this trilogy. The story covers the epic battle of law vs. chaos, with Cyllan and Tarod as pawns of the gods.

Not only is the story captivating, I found the cover art to be fascinating. 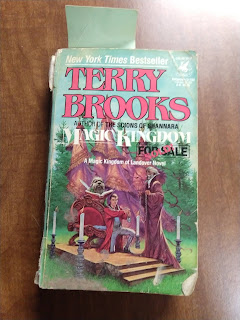 I have decided to reformat the Appendix N+, so the first 3 entries show a post date of July 1, 2019.

The first offering for Appendix N+ is the Magic Kingdom For Sale/Sold Series.

Follow Ben Holiday on an adventure to an impossible magic kingdom where none is as they seem. The series includes 6 books spanning two generations of heroes.

Dirk the prism cat's introduction to the series, as unicorns race through Chicago! Seriously, the best damn non-sequitur ever!

If I had magic, I'd want it to be like powers of Questor Thews. Unsure, uncertain but always on the right side.

Brookes explores Fey magic with the introduction of Mistaya, Willow and Ben's daughter.

Mistaya is loaded with charm and magic, but being Ben's daughter means this story isn't going where you think. It's a horrible ending to a great series, but an excellent reason to write one more book.