Session Update - Save Vs. Disease

My players, their children have all failed their saving throws vs. disease. Another session will buy it due to cold and flu season.

So this weekend I want to try something different. I want to do an inked action scene on 14"x17". I normally work on images no larger than 8x11. I started laying it out. Excuse the low quality phone images. This doesn't fit in the scanner. 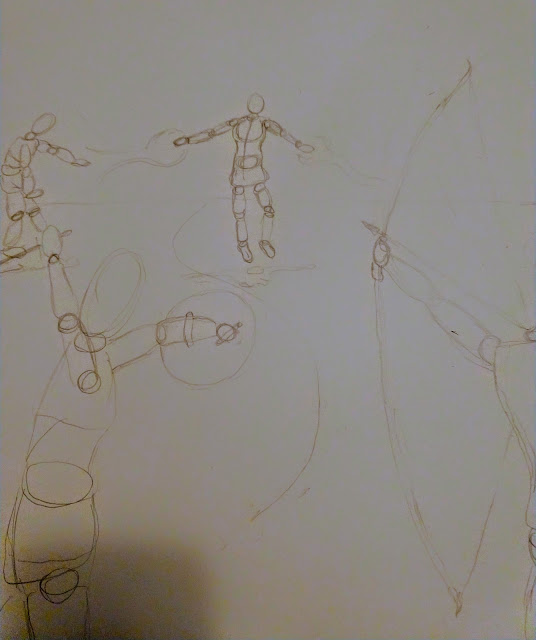 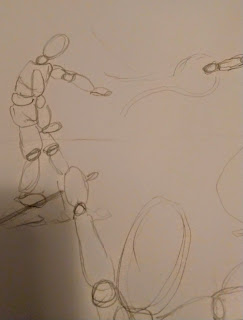 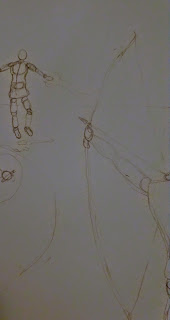 I have 3 characters converging on a central character.

The lightly drawn figure on the right is an archer readying a shot. She is wearing a pallas, a sort of cloth garment worn over a toga.

The figure on the left has been blindslided with a bolt of energy. She is not quiet on the ground. She will be wearing a gown and doesn't appear to be a typical combatant.

The third foreground character is a man with a sword and buckler or target shield.

The woman in the middle is a magic user with some interesting magical items and powers. First, she has a custom spell called "Disruption". It is very much like a magic missile, except it does 1d4 per shot, shots can hit any living or non-living thing with a to hit roll. It never increases in power, but the number available increases every two levels instead of three. She does not wear any "protective" magic, per se. She wears a wolverine pelt, with an intact skull as a stole. It can be commanded to attack, making defense rather moot. I have only hinted this magic item with a snaking line through the middle of the sketch. 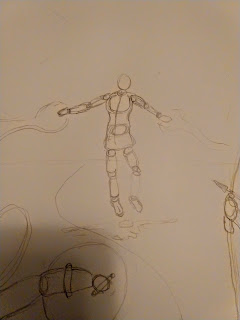 I'm not sure if this is the one I will be working with. I think I can find some images which will help me get the proportions correct. Something is very wrong with the bow right now and I should have drawn a horizon line first.