Magarven is a famous treasure hunter in from the Capital Region of the Empire. He was known to find and preserve Antiquities from ages past. A little over a decade ago, a torrential flood followed by landslides revealed a crypt or a tomb just miles from the Capital. Magarven was the first to enter the tomb and as was his habit, mapped it. The scale of his map is 2 yards or six feet per square. 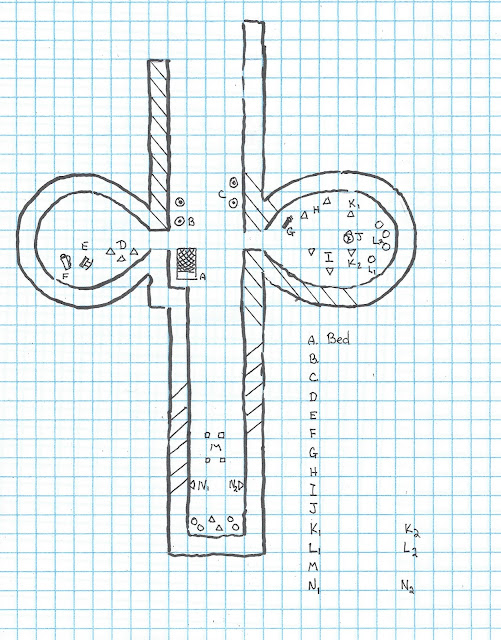 Inside, he found many strange items, the large bed (B) in the main hallway attracted his attention. He felt that it contained secrets. Bypassing it, he entered and diagrammed the two oval lobes and all of the items contained within. He forbid anyone from moving anything. As he progressed down the main hall to the south, he stopped at the four strange works in the center of the hall (M).

Something about them raised his alarm and he went no further. He ordered his men to begin excavation along the sides of the entry way. He ordered that the tunnels be no larger than the blocks that the tomb was made of. They began the western side and progressed to the western oval vault when he oddly ordered them to stop.

Magarven entered the new tunnel, inspecting the block walls from the outside. The workers heard him casting spells as he went. When he was done, he roped off the entrance behind him and repeated the casting inside the main hallway. Bored and unneeded, his crew left for the day.

In the morning, Magarven was found lying on the bed, with his map. He had marked off odd diagonal lines through the blocks of his diagram.

"It's broken. All is broken," he muttered. "Enter no more, if you value your life."

His command was followed for a few months, until it was obvious that he would not return to complete his work. A local thief and mage were brought in to explore the tomb. Armed with his map, the mage determined that the diagonal lines were paths of magical force. When the thief took a turn at the map, he decided he, too would not venture past the strange works (M) in the middle of the hallway. His rationale was that if the great Magarven would not cross that point, he wouldn't either. Nothing indicates what is wrong with the space.

Unlike other weird tales, Magarven is not accursed, mad or dead. He merely refuses to speak of his Last Polyandrion. He has taken to writing of his adventures that lead him to the Polyandrion, telling his followers and fanatics that the last chapter will explain the mystery.