Peninsula of Plenty World Building - Prelude to the End of War 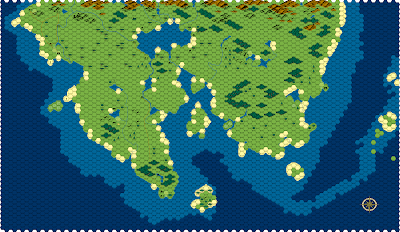 The northern border of the Peninsula of Plenty is lined with the Chalice Mountains. The range extends north about 150 miles. The range gets it's name from the cup like shape of the range, which scoops northward on the east and west sides like a Chalice. Far to the north are human habitations which can be reached most easily by Sea. Until contact, that kingdom believed itself to be the most southern extent of civilization. they call themselves "The Kingdom of the Majestic Ranges". In the bowl of the Chalice Mountain are fearsome tribes of orbs, goblins and giants. These creatures block most travel by land north and south from the Peninsula. However, some tribes of monsters raid outside of their area of control.

On the east of the Peninsula are the Elven Colonies, who have an alliance with both the Half-Orcs and the Dwarves of the Caldera located in the central eastern lobe of the Peninsula. The humans called these civilizations "The Combine".

In the darkest time of the Empire, a series of invasions from the north and a minor war with the Combine nearly extinguished the Empire. From over the Chalice Mountains, news of war in the dark-lands between the Kingdom of the Southern Ranges and the monstrous tribes trickled in with fleeing refugees.

The first groups of refugees were bands of strange little people, somewhat like the fey. They called 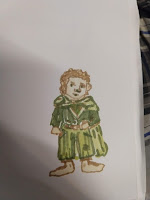 themselves halflings. They had the strange ability to pass without a trace and to fade into the environment as if invisible. Hot on their heels were a more frightening threat, gnolls. The little folk stressed the Empire already pushed to the limit by drought, famine and war. The gnolls smashed supply lines to the Capital Region. In these conflicts, the people fled to the coastal cities, including the Capital.

The massive influx of citizens collapsed the Capital's supply of grain. Riots broke out in the city. The poor and worse, the slaves were slaughtered by the rioters. As winter broke, news of the massacre reached the Elven Colony and what had been a border skirmish turned into a full on invasion. By mid-spring elven forces, along with a contingent of dwarves and half orcs, were besieging and blockading the Capital and it's coastal cities. This allowed the halflings in the area to break free to reach the dwarven lands and safety. In the Caldera, the Combine leadership was forging a weapon to destroy the humans. In the common, Latin tongue the sword was called Libertatem or more simply, "liberty".

A random sally from the Capital lead to the loss of this weapon and the humans rallied around it like a relic. It was given over to the Emperor, which may explain some of what transpired next. Back in the Dwarven Caldera, the Combine leadership, egged on by the halfling king forged a darker, more dangerous weapons.

Days from defeat, the Capital readied two legions and an a massive auxiliary force to go meet the Combine forces. At the last moment, the Emperor opened back channel communications with the Combine and agreed to never again enslave non-humans. And with that promise, the combine forces lifted the siege. Elven and dwarven slaves walked free from the city. The Combine hinted at requiring all slaves be freed, but withdrew with their brethren before the point became an issue.

In the following weeks, the Capital Region was able to resupply and reorganize it's forces for their greatest challenge, an enemy forged in fire in darkness. The Prelude to the End of War closed, and the true threat to not just peace, but civilization on the Peninsula, manifested.
Posted by Phil Viverito at 9/28/2019 06:55:00 PM