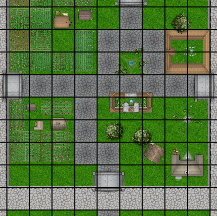 In my campaign, the druids of the City of Nace need an offensive spell that does not damage property. Bolt from the Blue is it. The Gardens contain many magical crops used by the Empire. Due to the healing nature of these items and the unique environment required for the plants, the Empire uses them as a both a good will item and a soak for their enemies.

The Empire is often on the edge of war with both the Dwarves and Elves. These products allow the Empire to bribe off their opponents with magic or sell them at a premium to the same to divert funds away from the war machine. The Elves and Dwarves use the price of said items as a means of measuring the Empire's war drive. Low prices tend to indicate the Empire is NOT willing to be aggressive and may be facing some sort of other threat. The Dwarves have no comparable magic, while the Elves do. Cost of shipping from the Elven homeland makes the human Empire's market work.

Bolt from the Blue

Bolt from the Blue is a precision lightning spell, which only hits one target. It can only be cast outside and requires no visible storm or cloud. A bolt of lightning streaks to the target, almost horizontally from the horizon. The bolt will avoid all other objects and creatures to strike the target. It will not damage non-living items, however, it can be used on the undead.

The bolt does 2d12 and will stun, deafen and blind a creature for 1d6 rounds. If the victim makes a saving throw, they take half damage and are only stunned deafened and blinded for 1d3 rounds. Each one of these effects has a separate duration, so someone could be stunned for a round, deafened for three and blinded for 6 rounds. All durations start at the moment of the strike and run concurrently. There is a chance that someone will be stunned longer than they are blinded, rendering that status moot.

Additionally, if a saving throw is made, the target will have at least one hit point left. It is an excellent and humbling negotiation tactic.

The spell has an odd side effect on other spells and casters. The bolt causes short term memory loss. If a spell caster is struck while preparing a spell, they do not lose the spell. The caster forgets that they ever made the attempt to cast whatever spell they had in mind and can attempt to cast it again. If someone struck is subject to a charm like effect, and they survive the strike, they are immediately allowed a saving throw vs. that charm. If a character is wielding a cursed weapon is struck, there is a 50-50 chance that they will drop it and have the presence of mind NOT to pick it back up. This is a single roll, not two rolls.
Posted by Phil Viverito at 9/18/2019 04:18:00 PM