Cell of Rona the Wisewoman

Rona the Wisewoman is one of the NPC in my Peninsula of Plenty campaign. She is a very old woman and is an unlikely adventurer. After her husband passed, she felt a calling and traveled far to the north, into the mountains in search of god. She came to the Kerke of Yondalla the Provider. The Kerke was a typical halfling church, a stave structure. She begged entry and hermitage. The halflings agreed and provided her with a cell suitable for her needs. 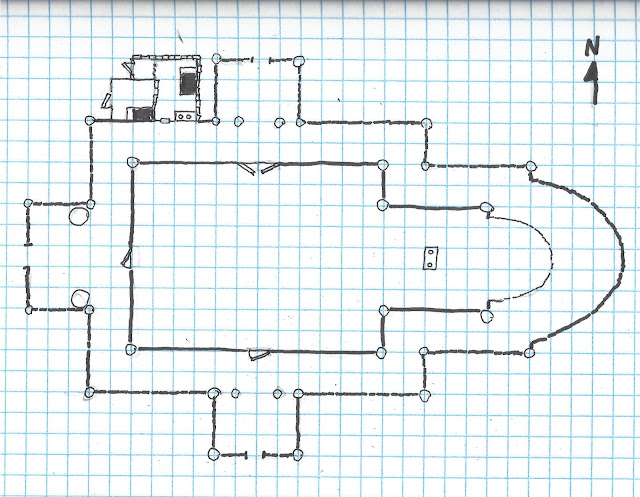 The main church is build of the traditional wood staves the halflings are so fond of. The exterior is loosely clad, while the interior walls are more precisely constructed. When Rona requested her cell, the halfling priest had the northern interior door replaced with a double door, so that Rona could see the main altar from her cell.

The expansion of the church was build with non-traditional stone, and allowed the church to add a servant's quarters to the structure. Rona was sealed in her cell, her only access to the outside world was a small window facing into the church and bars facing west into the parlor area where she could recieve guests.

When word of the Emperor's need of adventurers arrived at the Kerke of Yondalla, Rona smashed a hole in the north wall of her cell to respond. The halfings have repaired the hole and removed the bars between the parlor and the cell.

Since the day of her leaving, the candles on her private altar have been burning bright yellow, without being consumed. Many miracles of healing have occurred in and around the cell. The halfling priest has taken this as a sign that that Rona is a Saint. In response to this revelation, the tribe has begun solidifying the church's exterior walls to ensure the structure remains whole for future generations.
Posted by Phil Viverito at 9/23/2019 10:36:00 PM