Review - The Rains of Eridan by H. M. Hoover 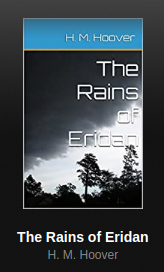 Eridan is an old world. Dry and slow under the heat of the little sun. Humanity reached out to it via their corporate sector explorers, founding three bases on the planet. As the story begins, a sort of madness takes them. The teams become obsessed with collecting strange crystals found out in the wilderness.

Theodora (Theo) Leslie was equally obsessed, but with life not rock. As a biologist, she secreted herself away in the mountain wilds to explore and document all these new forms of life.

Until death arrived. A mutiny broke out and the conspirators decided that Theo's forward base was a perfect place to dump the bodies. Theo rescues a young woman from the targeted kills and being a run for safety and sanity while searching for the cause of this plague of violence.

The Rains of Eridan is a shift in focus for H. M. Hoover. These characters are heavily weaponized and Theo as an adult in charge of a young survivor introduces the maturity of love and compassion that does not come out in her other works. Hardly a romance novel, Hoover explores the different ways that people interact and come to care for one another on many different levels. The love story in this novel is multifaceted and pleasantly surprising.

Of course, being who she is, Hoover only allows one love story to end within the pages of the book, allowing the others to persist in the reader's memories and questions. Many of her works seem to end before the end comes allowing the reader's imagination to take flight after the work is over. It's actually a wonderful thing to have open questions at the end of the reading.

The weaponization of the characters plays out in grim violence, which is delicately handled in this young adult book. The devices and scenarios are creatively but never come down to the insanity of technobabble.

An artist like Hoover opens doors as the reader progresses through her works, but never opens the pandora's box of over the top creations.