Raphael by R. A. MacAvoy 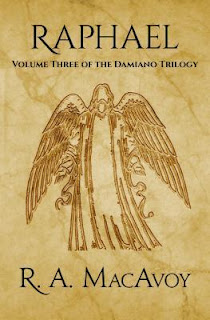 Who is this author? R. A. MacAvoy is a wonderful science fiction and fantasy author, who by 1984 had 4 books in print. She is a careful researcher with excellent storytelling abilities.

What is their idea? In this final chapter in Damiano's Lute trilogy, we follow the plight of Raphael as he wars with his brother Lucifer.

How effectively does that person tell a story? Raphael is yet again a wonderfully well-researched historical fantasy novel set in 12th century Europe. This time, Raphael finds himself at Lucifer's mercy in Moorish Granada. Stripped of his angelic form and powers, he is sold in slavery where yet again, the growing cast of characters bring this story to a conclusion.

What are the book's the strengths? The main strength of MacAvoy's writing is the careful research and blending of fantasy to bring her characters to life. The details of daily life in Granada are rich and engrossing while repellant as the main topic of this novel is slavery. Djoura was a fantastic addition to the story as both a powerful heroine and love interest to Raphael.
What are the book's weaknesses?  Unfortunately, the book suffers from a lack of structure, where the established protagonists from Damiano and Damiano's Lute were secondary characters offered with zero development between the last installment and this one. Gaspare stands out as a very bad evolution from his prior self in other chapters of the story.

Back in June of '85, White Dwarf Magazine offered the pronouncement that Raphael would be a Disneyfication of the series. While they probably hadn't read this particular book at the time, they weren't wrong. Many of the ideas of the series were heavily subverted by this installment and Raphael would have been much stronger had it been divorced from the rest of the series.

What was particularly terrible was the Epilogue, which closed out the series perfectly. It was five-star writing tacked on to the end of a very slapdash work and accounts for much of Raphael's one-star rating. If the Epilogue had been tacked on either one of the prior books, on its strength alone, those titles would have been perfect. Even if MacAvoy simply copy-pasted it into each preceding piece.

Sadly, the first 435 pages were not worthy of the last five pages.

What made this ending so strong was the growth of Gaspare and the introduction of his family to the wild mix of history and fantasy. Viewed through a historical lens, many of the defining exploits of Damiano and his friends were mistakenly attributed to historical figures, which was an eye-opening insight into the depth of research and planning by MacAvoy. What should be a crowning achievement was twisted into a mere afterthought.

You can search for Raphael on Abebooks.