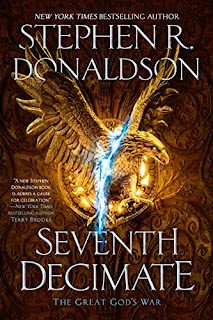 Donaldson is known for his use of obscure words and bleak stories where characters confront and cross their self-created moral event horizons in support of a wide and wild-ranging story. The Seventh Decimate is clearly born of this style of storytelling but nicely reverses itself so as to place the reader at a distance from the main characters. The use of this "observation mode" narration is effective and engrossing as the reader can understand the main antagonist's point of view without having to buy into it. Additionally, the prose lacks those obscure words and heavy sentence structures Donaldson is so well known for using. This makes for a quick read.

This book describes the war between the magic-using Amikans and the gun-toting Bellegerian forces. There is no lead-up to this juxtaposition of genres, Donaldson just lays it out there for the reader. The plight of both kingdoms is presented in the Bellegerian Prince's point of view. The Prince, a simple man, lacks many of the horrible traits of Thomas Covenant and he is a transparent character for the reader to study. Oddly, this level of transparency makes the Prince an ideal, if unlikely, a hero to carry the story to completion. Being that this is Donaldson, there are many "What the Hell, Hero?" moments in this story, but none of them are surprising or horrifying which is a heavy shift in style for the author. There is nothing terribly inexplicable in the Prince's actions, he is flawed and simple but never works in a way to sabotage the story for the sake of a twist. And there are many twists.

The final chapter is rather disappointing as a singular book, the cliffhanger ending is great for a series but may put off the casual reader who was expecting some sort of solid endpoint. However, that end IS exactly as you would expect which is very pleasing.

You can use this link for The Seventh Decimate on Abebooks.