Review - The Winds of Mars by H. M. Hoover 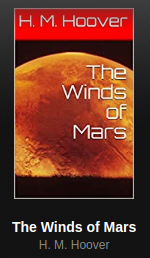 Mary Helen Hoover was born in 1935, in Ohio. Her family home's basement that was dug back when Thomas Jefferson was president. From that humble beginning, she hopped from Los Angeles to New York City to finally land in Virginia. From 1973 to 1995, she wrote 16 published books.

Mary Helen Hoover moves closer to home in this novel. As the name says, it takes place on Mars. Additionally, the story seems to set itself in a reasonable close time period to now. Say 200-400 years in the future.

Annalyn Court is the daughter of the President of Mars, a man she has never met. She has been raised to take her appointed place in the elite upper class of Martian citizens. The question is, does she want that?

The answer is not very clear. Starting with Court's earliest memories and progressing into young womanhood, she carves a path against her planned fate. Adventure and horror await and she clashes those who would make the average Martian subservient to the immortal upper class.

This is one of my least favorite of Hoover books. First, it delves into YA horror and shock. Second, it has slightly dated itself through no fault of Hoover's. The fact is, Mars is now well known territory and her outdated information is rather glaring. There are fights, gunfire and bombings which is atypical for Hoover but handled very well when compared to most YA books about war. People die. Important people die. It's rough for a Young Adult title but nothing compared to the crap that is put out today.

All of this running against some very child-like scenarios and characters. One of the standout characters in the book has a punny name: Hector Protector. He is the droid bodyguard of Annalyn Court. Almost three decades ago, such things were probably innovative; but now "Hector Protect Her" doesn't stand the test of time. It seems like a very fairytale addition to a book about a young woman coming of age and into her own on her own. It doesn't make sense.

I happen to love the character Hector, but my daughter declares that he sucked. If only he had his own book because he is conceptually interesting but misplaced in a story about a woman growing up. It cuts the ending off at the knees.

It is a quick and enjoyable read. Books by H. M. Hoover on AbeBooks.