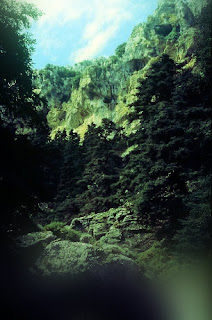 I was wondering why there was so much dust in River’s Rest. It turns out that River’s Rest is modeled on Andalusia in Spain.

Andalusia is a mediterranean climate and experiences both torrential rains and cool dry spells. This was revealed by Scribes on the forum.

Perhaps the image on the left is the hills where the Kakore was harvested for my runestaff.

I think it is wonderful.

The current descriptions go back to Bradach and Jineer. They gave the town a dry and dusty flavor, with vague hints of Middle Eastern Culture. I would describe it as Moorish, but Middle Eastern fits, too.

Another possible easter egg in the town is the inexplicable model ship available at Bertha’s. It might have been modeled on the ship in MYST, however no clear evidence of this exists. There is a couple of ships in the River’s Rest environ’s, so this could be completely independent of the MYST ship.
Posted by Phil Viverito at 8/10/2019 08:00:00 PM